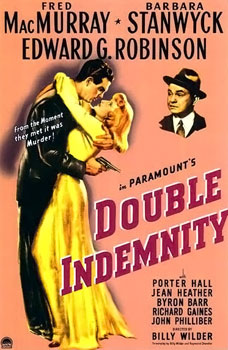 The 1944 best picture nominee Double Indemnity is probably one of the most imitated films ever made.  While it may not be the first film noir, it is one of the most influential and its plot has been duplicated in countless films.  In fact, it’s such an influential film that all one has to do is say, “Indemnity” and you automatically know that they’re talking about murder.

Most people assume that the film is the story of Walter Neff (Fred MacMurray), an insurance agent who thinks that he’s smarter and smoother than he actually is.  When Phyllis Deitrich (Barbara Stanwyck) approaches him with questions about how much her husband’s life insurance would pay off if his death was accidental, Walter immediately figures out that she’s talking about murder.  At first, Walter tells her that he’s not interested but actually he’s very interested.  Soon, he and Phyllis are lovers (though Walter, from the start, seems to know that Phyllis is just using him) and he’s plotting out her husband’s murder.  After he does kill Phyllis’s husband, Walter makes it look as if he fell from a train.  At first, the death is ruled a suicide but, just as Walter hoped, his best friend and fellow insurance agent, Barton Keyes (Edward G. Robinson), announces that it wouldn’t make any sense for a suicidal man to jump from a slow-moving train.  Instead, Keyes successfully argues that the death should be ruled an accident and, as a result, the life insurance pays out for double of its value.

However, the money makes Walter paranoid.  He starts to worry that Phyllis will betray him.  Even worse, he’s approached by the dead man’s daughter, Lola (Jean Heather).  Lola tells Walter that she believes that Phyllis not only killed her father but her mother as well.  Soon, Walter is involved with both Lola and Phyllis.  Walter claims that he feels guilty and protective of Lola but MacMurray’s wonderfully ambiguous performance leaves us wondering just how much we should trust anything that he has to say.

Now, as I said before, the film may be narrated by Walter Neff and it may be set into motion by his affair with Phyllis but ultimately, the film is not about his relationship with Phyllis.  Instead, it’s about Walter’s friendship with Barton Keyes.  When we first see Walter, he’s recording a confession specifically for Keyes to hear and the film ends not with Walter and Phyllis but instead with Walter and Keyes.

In many ways, Keyes is the opposite of Walter.  Whereas Walter is slick and amoral, Keyes is rather nerdy and ethical to a fault.  Walter respects Keyes for his brilliant mind and, to a large extent, he does what he does because he wants to prove that he’s just as smart as Keyes.  Keyes is the type of man that Walter aspires to be while Walter is the dark side of Keyes’s own obsession with mystery.  It’s only appropriate that the film ends with Walter and Keyes because, ultimately, their friendship is the heart of the film.

Double Indemnity is a classic.  Barbara Stanwyck and Fred MacMurray set the standard by which all future illicit couples would be judged.  But really, the film is stolen by Edward G. Robinson.  Over the course of his long and remarkable career, Robinson was never once nominated for an Oscar.  Watching Double Indemnity, you can’t help but wonder how such an injustice could have happened.