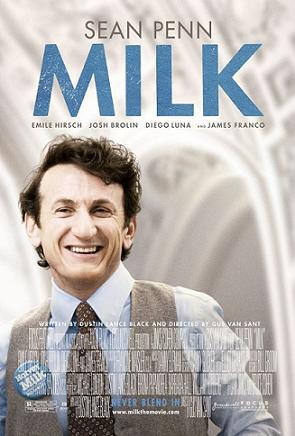 For the past three weeks, I have been in the process of reviewing, in chronological order, 94 films about politics and politicians.  It’s a little something that we call Shattered Politics.

And while I’ve had a lot of fun doing it, it does worry me a bit that I may have made the Shattered Lens into a far more cynical site to visit.  That’s largely because I don’t trust politicians or the government in general and, despite the fact that we started off with Abraham Lincoln and Mr. Smith Goes To Washington, the majority of the films that I’ve reviewed have reflected that fact.

So, in order to combat that cynicism, I’m going to recommend a film from 2008 that, despite being a biopic about a politician, is actually rather inspiring.  I am, of course, talking about the 2008 best picture nominee, Milk.

Milk tells the story of Harvey Milk who, in 1977, became the first openly gay man to be elected to a major public office.  Now, just consider that.  Up until 38 years ago, nobody who was openly gay had been elected to public office.  Nowadays, the idea of an out gay man or a lesbian running for public office is only shocking to a dwindling minority of homophobes.  Even down here Texas, which everyone up north always smugly assumes to be so intolerant, nobody is surprised when a gay or a lesbian not only runs for office but wins as well.  Sheriff Lupe Valdez has served as sheriff of Dallas Country for over ten years and, though she’s been controversial, none of that controversy has concerned her sexuality.  Meanwhile, Annise Parker has served three-terms as mayor of Houston, making Houston the biggest city in America to have an openly gay mayor.

However, before Lupe Valdez could be sheriff or Annise Parker could be mayor, Harvey Milk had to serve on the San Francisco Board of Supervisors.

Milk follows Harvey (Sean Penn, who won an Oscar for his performance) and his much younger boyfriend, Scott (James Franco) from the moment they first meet in New York to when they moved to San Francisco in 1970.  We see how Harvey first found fame as a neighborhood activist and how he challenged both the political and gay establishment of San Francisco in his campaigns for political office.  When he finally wins a seat on the Board of Supervisors, he does so at the cost of his relationship with Scott.  He enters into another relationship with the self-destructive Jack (Diego Luna), which ends tragically.

By winning office, Harvey becomes a spokesman for gays everywhere.  When a sinister state senator (Denis O’Hare) attempts to pass a bill that would forbid gays from teaching school, Harvey leads to opposition.  And, while Harvey’s career continues to rise, the career of another supervisor — Dan White (Josh Brolin) — plummets.

Elected at the same time as Harvey, Dan is an uptight former cop.  Though he and Harvey originally strike a somewhat awkward friendship (Harvey is the only supervisor to come to the christening of Dan’s child), Dan soon comes to resent Harvey.  (At one point, Harvey suggests that Dan might be closeted and Brolin’s tightly coiled performance certainly implies that Dan is repressing something.)  Eventually, Dan shoots and kills both the mayor (Victor Garber) and Harvey.

Though the film ends in violence and anger, it also ends with hope.  Though Harvey may be dead, the activists that he inspired are there to carry on.

Because the film was directed by a gay man, written by a gay man, and tells the story of a gay man, Milk is often dismissed, even by critics who liked it, as just being a gay film.  But, actually, it is a film that should inspire anyone who has ever felt like they’ve been pushed into the margins of our national culture.  By the film’s end, Harvey Milk has emerged as not just a gay hero but as a hero to anyone who has ever been told that their voice does not matter.  When Harvey says, repeatedly, “You’ve got to give them hope,” it’s hope for all of us.