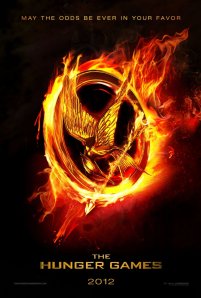 The Hunger Games is something of an event film, which means that this may not be the only review for the movie. Especially since I haven’t seen Battle Royale, which many say The Hunger Games is very similar to, there’ll probably be a number of viewpoints to this movie.

Update: leon3duke has added his own in-depth review of The Hunger Games. Definitely worth reading.

I consider myself fortunate that I knew next to nothing about the movie adaptation to Suzanne Collins “The Hunger Games” or the novel itself. When I purchased my ticket for a midnight showing, there were only about 10 people around, many of them wearing T-Shirts with the logo. However, when the movie house started asking for the tickets, that 10 turned into 30. By the time the movie started, the 30 became about 50 or so. Not exactly a packed spectacle for where I reside, but I know the ones in Manhattan were.

If any comparisons can be made, I guess it could be to 1987’s The Running Man, with maybe a dash of The Truman Show, but The Hunger Games stands on it’s own because it’s protagonist, Katniss Everdeen, comes across as being in danger every step of the way. That’s enough to keep the audience enthralled. Arnold, not so much.

So, what are the Hunger Games? It’s overall a really great film with a strong female lead in Jennifer Lawrence.

In the future, the nation goes through a number of changes. Wars, famine and poverty ravage the land and eventually, a sense of peace is found. Panem, as the country is called, is divided into 12 Districts. Much like Joss Whedon’s Firefly, the land is broken between the rich who live in the Capitol and the Districts, which live off of a bartering system and are extremely poor. At one time, a 13th Division challenged the rule of the Capitol and had to be taken down. As punishment and to remind the other districts of how great the Capitol is, each District picks one boy and girl between the ages of 12 and 18 to participate in a last one to the death event known as the Hunger Games.

Lawrence (X-Men First Class, Winter’s Bone) easily carries the film as Katniss Everdeen, a resident of District 12, who is great at Archery and uses her skills to hunt for food for her family. When her sister, Prim (Willow Shields) is chosen as a Hunger Games Tribute, she volunteers to take her place. Leaving behind her mother, sister and best friend (Liam Helmsworth), Katniss is taken to the Capitol to participate. Joining her is another member of her District, Peeta (Josh Hutcherson).

Katniss and Peeta are then introduced to their team, lead by Haymitch Abernathy (Woody Harrelson), Effie Trinket (a nearly unrecognizable Elizabeth Banks), and Cinna (Lenny Kravitz). Harrelson pretty much nails every scene he’s in, something I’ve noticed lately with a lot of his roles. I found it interesting as well to see Lawrence play opposite Lenny, considering she only recently acted alongside his daughter Zoe in X-Men: First Class last year. He actually does well with the time he has on-screen.

That there is the core of the film. Can Katniss survive The Hunger Games? There’s much more to that, but in originally writing this, I ended up explaining most of the film.

The movie does get bloody. It doesn’t try to make light of any of the situations the characters are in, but being a PG-13 film, it doesn’t turn into anything on the lines of a Saw film (which makes me wonder how that would have turned out).

Can I take the kids to this one?

You can, yes, but note that even though this based on a story written for young audiences, it does have its share of blood and violence. Then again, considering that you can get the same kind of violence from video games these days, I’d say only the really young may be bothered. If there’s any problem regarding kids, it could be a patience factor. Kids expecting non stop action may get a little bored, but if they already read the book, they probably won’t have any problems with it at all and know what to expect. In terms of sexual situations, there aren’t any.

How long is the film? Am I going to yawn?

The Hunger Games clocks in at about 142 minutes (2 hours and 22 minutes). The first half of the film needs to set up for the second half (The Games themselves), and while it doesn’t move slow, it takes it’s time in letting the audience know what the stakes are for them and to show the contrasts between the districts and the Capitol. Think of it like Batman Begins. Before we get to see Batman, we had to be able to see Bruce Wayne go through his training. There’s not action all the way through the movie, which actually works in it’s favor. The same kind of applies for The Hunger Games. If that made you yawn, then that first half of this film may have the same effect. I loved it, myself, because a lot of that information felt necessary to me, but what works for me may not work for everyone else.

Overall, The Hunger Games was definitely worth it, at least for an initial viewing. I hope that if they go with a sequel (given the success of this one, that’s pretty much guaranteed), they expand more on Panem and some of the events that brought things to where they are now.