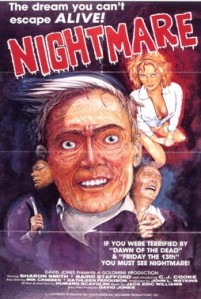 I love movies.  I love watching movies, reading about movies, and talking about movies.  Perhaps most of all, I love the hunt.  I love discovering movies or finding movies that had previously, for me, only existed in reviews or as a collection of screen captures.  To me, there is no greater experience the watching a movie for the first time.  (Even if, as often happens, that first time turns out to be the only time.)  Listed below are ten movies that I have yet to see but desperately hope to at some point in my life.

1)  Giallo a Venzia (1979) — This is supposedly one of the most graphically depraved Italian horror films ever made.  If that’s not a recommendation, I don’t know what is.  Actually, I haven’t heard a single good thing about this movie but it has still become something of a Holy Grail in my quest to see as much Italian horror as possible.  This is largely because the movie is nearly impossible to find.  When it was first released, it was banned in the UK as part of the so-called “video nasties” scare.  (Trust the English to not only ban a movie but to come up with an annoying name for doing so in the process.)   This led to it never really getting much of a release in the English-speaking world and, now years later, it’s only available on bootleg DVDs.  As such, I imagine that if I ever do see it, it’ll be because I made a deal in a back alley with some bald guy who speaks with a Russian accent.  Much as with drug prohibition, the fact that its “forbidden” has made this movie rather attractive.

The few people who have seen this always mention that towards the end of the movie, Mariangela Giordano’s legs are graphically sawed off.  This makes sense as Giordano was always meeting grotesque ends in Italian horror movies.  In Patrick Lives Again, she is impaled (through her vagina no less) by a fireplace poker while in Burial Ground, she makes the mistake of breast feeding her zombie son.  In many ways, Giordano was like a female Giovanni Lombardo Radice.  However, its odd to consider that while the sight of Giordano’s legs getting sawed off was enough to get the film banned, the sight of poker being graphically driven into her crotch was apparently totally acceptable.  Censorship is a strange thing, no? 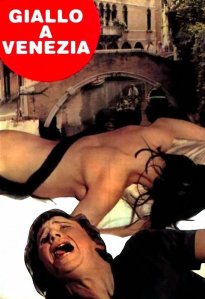 2) An uncut version of Nightmares in a Damaged Brain (1981) — This is another banned Italian movie.  When Nightmares was originally released, Tom Savini was credited as being behind the special effects.  Savini, however, has long claimed to have had little to nothing to do with the movie.  As Savini, to his credit, has never been embarrassed to claim ownership for his effects (regardless of the movie they appear in), I’m inclined to believe him.

In many ways, Nightmares reminds me of a film that Savini actually did work on, Maniac.  Not so much as far as the plot is concerned but just in the same bleak worldview and almost palpable sleaze that seems to ooze from every scene.  The version that is most widely available on DVD (and the one that I own) appears to be the cut version that was eventually okayed for release in the UK and even cut, this is a film that remains oddly compelling in just how much its willing to immerse itself in sleaze.  The uncut version remains elusive but someday, I will find it.

3) The Day The Clown Cried (1972) — You knew this one was coming, didn’t you?  I think everyone wants to see Jerry Lewis’s never released Holocaust comedy.  Supposedly, Lewis keeps the movie in a locked vault which I just find to be oddly hilarious.  My hope is that, if nothing else, some enterprising filmmaker will make a movie about a crack team of thieves who break into Jerry Lewis’s estate just to steal the only copy of The Day The Clown Cried and sell it to the people at Anchor Bay.  Jerry could play himself.  I also think this film will see the light of day sooner or later.  At some point, either Jerry Lewis or his estate is going to need the money.

4) The Other Side of the Wind — Orson Welles apparently spent the last few decades of his life making this movie.  At the time of his death, the movie was reportedly 95% film but only 40% edited.  Apparently, because of a whole lot of complicated legal things, the movie has spent the last 30 years under lock and key in Iran.  Even if somebody could rescue it, the remaining footage still needs a strong hand to put it together.  While I’m sure that many directors would be happy to volunteer to provide that hand, the two names most frequently mentioned — Peter Bogdonavich and Henry Jaglom — do not fill me with confidence.  I’d rather see the final film put together by Jess Franco, who was assistant director on Chimes at Midnight.

5) The Fantastic Four (1994) — This is not the dull movie that came out in 2005.  This apparently an even duller version of the same film that was made 11 years earlier for legal reasons.  Apparently, Roger Corman would have lost the movie rights to the comic book if he didn’t start production on a film by a certain date.  So, this film was made on the cheap and then promptly shelved.  My main desire to see it comes from the same morbid desire that makes me look at crime scene photos.  How bad can it be? 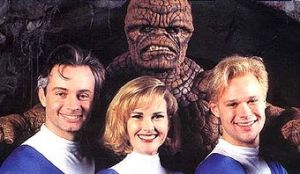 6) Le Cinque Giornate (1973) — This Italian film is apparently many things.  It’s a comedy.  It’s a historical epic.  It’s a satire of then contemporary Italian politics.  And most of all, it’s also apparently the only non-horror film directed by Dario Argento.  This was Argento’s fourth  film, coming after his celebrated animal trilogy and it was apparently an attempt, on Argento’s part, to break away from the giallo genre that he has since come to symbolize.  Though the film apparently did well enough in Italy, it failed to establish Argento as a director of comedy and that’s probably for the best as Argento’s fifth film would be the classic Deep Red.  Still, it’s hard not to play the “What If?” game, especially when it involves an iconic a figure as Dario Argento.  It’s also interesting to compare Argento’s attempts to go from horror to comedy with the career of Lucio Fulci, who went from comedy to horror.

7) Cocksucker Blues (1972) — Robert Frank’s documentary of the Rolling Stone touring America was officially unreleased because of its title.  While that title certainly played a role, it also appears that the film was unreleased because of just how much hedonism Frank managed to capture backstage.  The Stones apparently went to the court to block the film’s release.  Somehow, this resulted in a ruling that the movie can only be shown if Robert Frank is physically present.  Mr. Frank, if you’re alive and reading this, you have an open invitation to come down to Texas and stay with me anytime you want.  Seriously.

8 ) The Profit (2001) — The Profit is a satiric film about a cult.  The film’s cult is known as The Church of Scientific Spiritualism and is led by a recluse named L. Conrad Powers.  Sound familiar?  The film’s release was (and continues to be) prevented by a lawsuit brought by the Church of Scientology.  Say what you will about the Vatican, at least you can attack them in a movie without having to worry about getting sued or blown up.

9) Superstar: The Karen Carpenter Story (1987) — Probably one of the most famous film that most of us will never see, Superstar tells the story of Karen Carpenter through the use of Barbie dolls.  Director Todd Haynes supposedly failed to get the rights to the music he used in the film and, obviously enough, nobody in the Carpenter camp was all the eager to give him permission.

9) Can Hieronymous Merkin Ever Forget Mercy Humppe And Find True Happiness (1969) — God, don’t you hate that title?  And, honestly, are you surprised that a film with that title is apparently history’s 1st X-rated musical?  Anyway, this is a movie I’ve come across in various film reference books where it’s either described as a masterpiece or (more often) one of the worst movies ever made.  Myself, I love musicals and if the musical numbers are mixed in with explicit sex — well, why not?  But that title — that title just gives me a bad feeling.  Another thing that gives me a bad feeling is that the movie was apparently the brainchild of Anthony Newley.  I don’t know much about Mr. Newley but what I do know seems to indicate that he personified everything that most people hate about musicals.  The film is apparently autobiographical and its about a really talented composer who treats the women in his life terribly but has a lot of reasons (or excuses) that we learn about in elaborate flashbacks and — wait, I’ve seen this movie.  Oh wait, that was Nine.  Anyway, Merkin was a huge flop and it has never been released on any type of video format.  Yet, it has not been forgotten which can only mean that it must have really traumatized the critics who saw it.  In other words, this is another one of my “how-bad-can-it-be” crime scene movies.