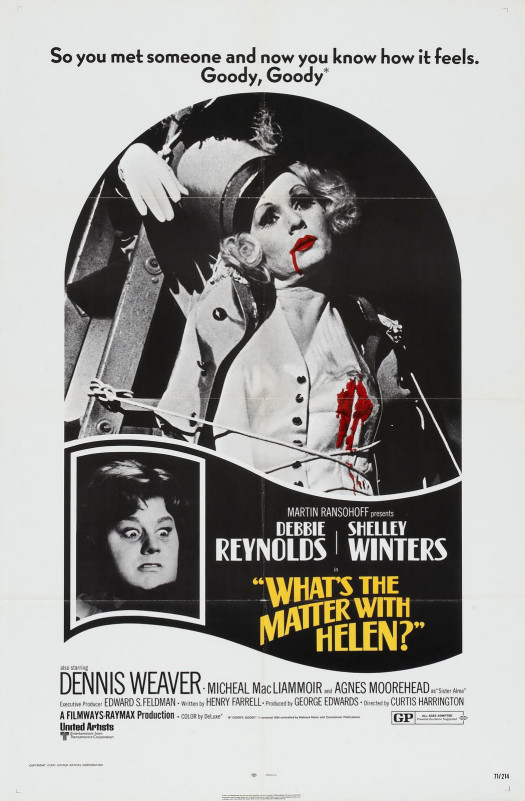 The recent FX mini-series FEUD has sparked a renewed interest in the “Older Actresses Doing Horror” genre, also known by the more obnoxious sobriquettes “Hagsploitaion” or “Psycho-Biddy” movies. This peculiar film category lasted from 1962’s WHATEVER HAPPENED TO BABY JANE? until winding down around the early Seventies. 1971’s WHAT’S THE MATTER WITH HELEN? came towards the end of the cycle, a creepy little chiller with Debbie Reynolds and Shelley Winters   getting caught up in murder and madness in 1930’s Hollywood. 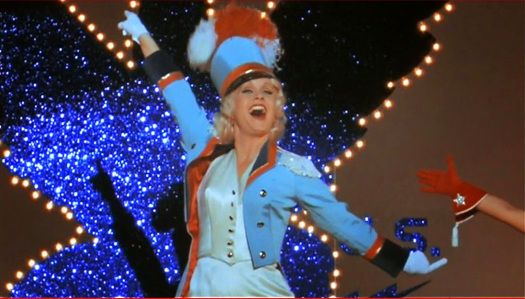 I wouldn’t exactly call Debbie Reynolds a “hag”; she was only 39 when this was filmed, and still quite a hottie, especially when glammed-up in a Jean Harlow “Platinum Blond” wig. Deb gets to show off her tap-dancing and tangoing in a few scenes, showing off her still amazing legs for good measure. She and Shelley play a pair of Iowa mothers who (as the opening newsreel footage tells us) have spawned two killer sons that…

(Lisa recently discovered that she only has about 8 hours of space left on her DVR!  It turns out that she’s been recording movies from July and she just hasn’t gotten around to watching and reviewing them yet.  So, once again, Lisa is cleaning out her DVR!  She is going to try to watch and review 52 movies by the end of Tuesday, December 6th!  Will she make it?  Keep checking the site to find out!) 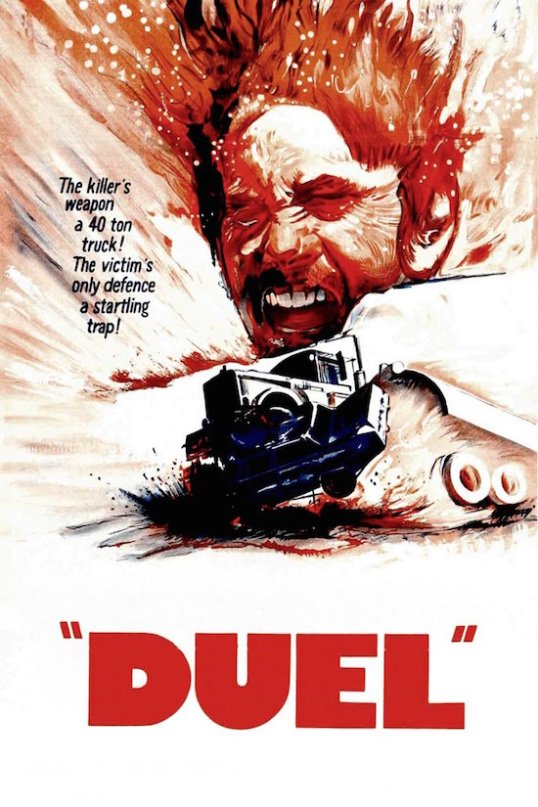 Duel tells the story of David Mann (played by Dennis Weaver).  The name is probably not a coincidence.  David is an “everyman,” if your idea of an everyman is a workaholic who is incapable of expressing his emotions.  David is driving through the California desert.  When he calls his wife (apparently, he left home in the morning without ever bothering to wake her), he tells her that he’s on a strict schedule and that he might lose an important sale if he’s delayed in any way.  You get the feeling, however, that David’s trip is less about business and more about a desire to get away from his life.  His conversation with his wife is strained and, when we watch him interact with a gas station attendant, we’re struck by how awkward David is.

Indeed, the only time that David seems to be really comfortable and relaxed is when he’s safely inside of his car.  When we first see him, he’s listening to a radio talk show and occasionally commenting on what he’s hearing.  David Mann has a better rapport with an unseen talk show host than he does with his own family.

Later, in the film, David is flagged down by a school bus that has stalled on the side of the road.  The bus driver asks David to give him a push.  For his part, David reacts with visible panic at the sight of several hyperactive children rushing towards his car. When they hop on his hood, David starts to frantically order them off.  It makes sense really.  The car is what he loves.

Of course, it’s not just bratty children that David has to deal with.  There’s also a gigantic truck traveling up and down the highway.  When David gets stuck behind the truck, he honks his horn.  He yells at the unseen driver.  He passes the truck at one point, just to have the truck promptly pass him so that it can continue to block him.  When the driver finally does motion for David to pass him, David changes lanes just to discover another car coming straight at him.

Today, Duel is probably best known for being Steven Spielberg’s first film.  (It was a made-for-television production that got a theatrical release in Europe.)  Watching Duel (and Jaws, for that matter) it’s easy to imagine an alternative universe where, instead of becoming America’s best known creator of mainstream entertainment, Spielberg instead became one of America’s best horror director.  Duel is a suspense-filled thrill ride, one that’s scary because it remains rooted in reality.  Seriously, who hasn’t gotten nervous when they’ve found themselves sharing the road with a gigantic truck?

(If anything, I’d argue that Duel is scarier than Jaws.  I mean, I live in Dallas so it’s not like I have to worry about getting attacked by a shark.  On the other hand, I drive my car nearly every day.)

Dennis Weaver plays the archetype of what would become the typical Steven Spielberg protagonist and he does an excellent job in the role.  Weaver is on screen throughout the entire movie.  We see the entire story unfold through his eyes and Weaver gives a harrowing performance as a man who is slowly but steadily pushed to the verge of a breakdown by an enemy that he cannot even begin to comprehend.

If you haven’t seen Duel, you need to.

For today’s horror on the lens, we present Don’t Go To Sleep!

In this TV movie from 1982, a little girl is killed in a horrific car crash.  Her family blames themselves for her death and they really should.  The father (Dennis Weaver) was drunk.  The mother (Valerie Harper) didn’t keep her drunk husband from driving.  Finally, the girl’s brother (Oliver Robins) and sister (Robin Ignico) were playing a prank on her when the car crashed.  By tying her shoe laces together, they made it impossible for her to get out of the car.

However, they’re not the only ones who blame themselves.  The dead girl blames them as well.  When the family moves out to the country and attempts to heal, the girl’s ghost goes with them.  And soon, she is encouraging her sister to kill the other members of the family.

And that’s just what happens.

Seriously, this movie took me by surprise.  For a movie that made for network television in 1982, it’s a surprisingly dark film that doesn’t shy away from graphically killing off most of the cast.  It’s a surprisingly effective little film and you can watch it below!

(Thank you to my wonderful cousin, Toni Posados, for recommending this film!) 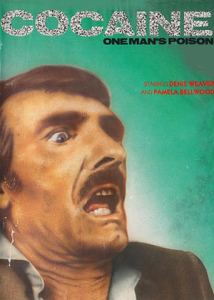 Now, I originally saw the 1983 made-for-TV movie Cocaine: One Man’s Seduction on Netflix so I have absolutely no first hand knowledge of how this film was advertised.  However, I have it on very good authority (i.e., I read it on another blog) that the image above is from the film’s VHS packaging.

Just looking at this image, you would be justified in thinking that Cocaine: One Man’s Seduction was an early David Cronenberg film.  Seriously, it looks like a deleted scene from Scanners and Dennis Weaver’s head is about to explode.

Add to that, it’s a very melodramatic title and the name of this series of reviews is, after all, Embracing the Melodrama Part 2!

Anyway, Cocaine: One Man’s Seduction is about a real estate agent named Eddie Grant (Dennis Weaver).  He’s the type of semi-successful white-collar suburban guy who you just know is going to have a really over-the-top midlife crisis.  He has a wife (Karen Grassle) who loves him.  He has a son (James Spader — yes, that James Spader!) who wants to put off going to college for a year.  Eddie also has a job where he’s viewed as being an over-the-hill relic.  People looking to buy a new home simply are not impressed with Eddie’s cheap suits, mild manner, and old-fashioned scotch-after-work style.

Soon, Eddie is driving a fast car, he’s wearing nicer suits, and he’s keeping a lot of secrets.  Then, one day, his son — JAMES SPADER! — happens to look inside Eddie’s shave kit and discovers where dad has been hiding his cocaine.

Now, this is where I was expecting Jeff VanVondern to show up and say, ” I see a bunch of people that love you like crazy and they feel like they are losing you. And they wanna fight to get you back.”  But apparently, people in the 80s did not need an intervention to get them to go to rehab.  Instead, they just needed to have a dramatic nose bleed at work and nearly overdose on someone else’s kitchen floor.  They also needed to be called out by James Spader.

Of course, it also helps that Eddie is friends with a recovering cocaine addict who is played by a very thin-but-already-bald Jeffrey Tambor.  Jeffrey Tambor is already something of a hyperactive actor (and that’s why we love him!) so when you combine that natural tendency with a character who is supposed to be coked up, it’s something that simply has to be seen.

Anyway, Cocaine: One Man’s Seduction is a fairly good example of the-worst-that-can-happen-will-happen cinema.  If nothing else, it has some worth as a time capsule and it’s undeniably interesting to see James Spader play a role that one would normally never associate with James Spader.

Cocaine: One Man’s Seduction is currently seducing viewers on Netflix.

This is one of my favorite episodes of The Twilight Zone! In Shadow Play, a man (Dennis Weaver) is curiously unconcerned about being on death row. According to him, it’s all just a recurring dream and everyone around him — the other prisoners, the District Attorney, the judge, the jury, and everyone else — is just a part of his dream. As the other characters start to realize that Weaver could be telling the truth, they’re forced to consider what will happen when he either wakes up or starts the dream over…

I love this one. It’s just a lot of fun and not quite as heavy-handed as some of The Twilight Zone‘s other attempts at social commentary.

This was originally broadcast on May 5th, 1961. It was directed by John Brahm and written by Charles Beaumont.