Welcome to Retro Television Reviews, a feature where we review some of our favorite and least favorite shows of the past!  On Sundays, I will be reviewing the made-for-television movies that used to be a primetime mainstay.  Today’s film is 1981’s Return of the Rebels!  It  can be viewed on YouTube! 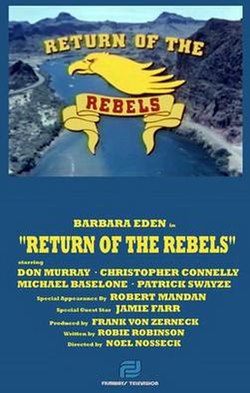 Mary Beth Allen (Barbara Eden) used to be the wife of the leader of Rebels, Arizona’s toughest motorcycle gang.  She’s now a widow and she operates a Colorado River campground.  Her teenager daughter, Amy (Deanna Robbins), has got a crush on a local boy named K.C. Barnes (Patrick Swayze) and that’s a problem because K.C. is kind of a jerk.

Every weekend, K.C. and his gang descend on the campground and proceed to have a good time, redneck-style.  They set up a few kegs of beer.  They water ski.  They play loud music.  They get into fights.  They drive their vans all over the property.  They are so disruptive that Mary Beth is losing customers.  For reasons that are not quite clear, the police refuse to help her.  For some reason, K.C. seems to be determined to drive Mary Beth out of business.  And when I say “for some reason,” what I mean is that there’s absolutely no reason for K.C. to be as obnoxious as he is.  It’s not like he owns a rival campground or anything.  He’s not going to gain a thing by running Mary Beth out of business.  K.C.’s only motivation seems to be that he’s a jerk.  Unfortunately, he’s played by a young Patrick Swayze, who was a bit too likable to be believable as someone who would be a jerk just for the Hell of it. Swayze smirks and sneers and laughs whenever Mary Beth yells at him but, up until the last few moments of the film, he still comes across more as being an overgrown teenager who is too dumb to realize how annoying he’s being than a true villain.  When K.C. does suddenly reveal himself to be a true villain, it’s a bit jarring.  It’s like seeing the neighborhood bully suddenly pick up a gun and rob a bank.  Swayze’s character was definitely bad but he didn’t seem that bad,

Regardless of K.C.’s level of villainy, his antics are threatening to put Mary Beth out of business.  She goes into the city and pays a visit on Sonny (Don Murray).  Sonny used to be a member of the Rebels.  Now, he’s a fairly successful auto mechanic.  He’s also always been in love with Mary Beth.  When he finds out that Mary Beth needs help, he decides that it’s time to get the old Rebels back together so that they can put some young punks in their place.

The problem, of course, is that some of the old Rebels are really, really old.  Al Williams (Robert Mandan) was once the most fearsome dude on a motorcycle but now he sells used cars and collapses after he’s challenged to run down to the end of the street.  Mickey Fine (Jamie Farr) is now more concerned with taking care of his family than riding motorcycles.  Jay Arnold Wayne (Christopher Connelly) is a wealthy businessman who …. well, he doesn’t get much of a personality beyond that.  “Wild” Bill Karp (Michael Baseleon) is still wild but he’s also middle-aged and out-of-shape.

Can Sonny get the gang back together before K.C. takes over the campground?  And even if he can, will he able to gather enough former Rebels to take on K.C.’s surprisingly large gang?  Seriously, when K.C. and his gang show up at the campground, K.C. appears to be leading a convoy.  It’s almost as if the entire population of Arizona is following K.C. around for the weekend.

As you may have already guessed, Return of the Rebels struggles to find a consistent tone.  On the one hand, the battle between the old bikers and the young rednecks is a dangerous one and the film tries to generate some suspense over whether everyone will survive.  On the other hand, the film’s cast is full of sitcom veterans who often deliver their lines as if they’re waiting for a laugh track to punctuate their point.  On the one hand, Patrick Swayze’s gang is supposed to be dangerous.  On the other hand, they’re Patrick Swayze’s gang.  For a bunch of delinquents, it seems like all they really want to do is spend the weekend water skiing and drinking beer.  Obviously, beer and motorboats don’t always go well together but Swayze and his friends still never come across as being quite as dangerous as they’re supposed to be.

Return of the Rebels is a film about getting old.  The members of the Rebels have all found success but all of them are nostalgic for their days of being “outlaw” bikers and they get one final chance to show everyone what they can do.  It’s not a bad theme but again, the film can never quite make up its mind how seriously it wants us to take either the Rebels or Swayze’s gang.  It’s a bit of a mess.  That said, the scenery was gorgeous and I’m enough of a country girl that I definitely got a little thrill out of watching scenes of various pickup trucks and vans driving through the river.  I have a weakness for rebels and reformed bikers.  It’s an amiable film, even if it doesn’t make much sense in the end.

One response to “Retro Television Reviews: Return of the Rebels (dir by Noel Nosseck)”