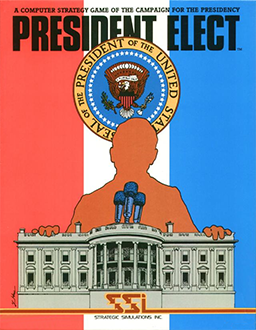 Earlier this week, I used the President Elect simulator to discover who would win if Dracula, Frankenstein’s Monster, and The Mummy ran against each other in the 2024 presidential election.  Dracula won easily.  The Monster carried D.C. and that’s it.

Then, I decided to see what would have happened in Frankenstein’s Monster had run against Richard Nixon in 1960.  Nixon won easily.  Even though the Monster received more votes against Nixon than he did against Dracula, he was still only able to carry two states in the Deep South, Georgia and Mississippi.

Today, I decided to see how Dracula would have done against Jimmy Carter in 1976.  I set up the simulation with the same economic and world conditions that Carter, Gerald Ford, and third party candidate Eugene McCarthy were debating in 1976.  The only difference is that I substituted Dracula for Gerald Ford.  No longer would Ford carry the stain of pardoning Nixon.  Now, it would be Dracula.  Again, I gave Dracula high score for his speaking ability, his personal magnetism, and his ability to stay cool under pressure.  I also made sure that Dracula’s campaign platform represented his authoritarian politics.

In the end, Dracula’s platform didn’t matter.  Watergate didn’t matter.  The economy didn’t matter.  Dracula wiped the floor with both Carter and McCarthy.  Carter challenged Dracula to one debate.  Dracula blew him out of the water.  In real life, Carter narrowly defeated Ford after Ford lost their debates.  In the simulation, Dracula dominated the election.

On election night, Carter got one piece of good news when he won the District of Columbia. 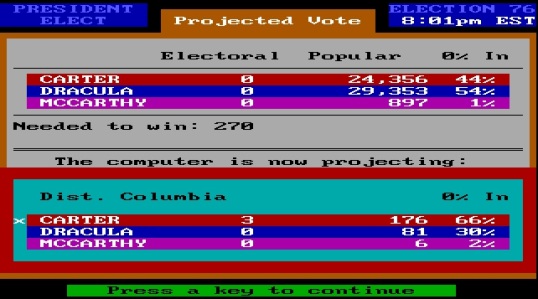 However, that would be all that Carter would win.  Dracula won the next state and never looked back. 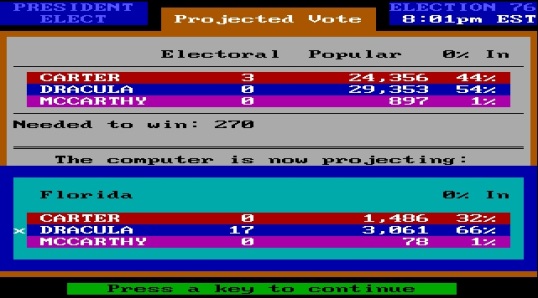 Carter was strangely competitive in Rhode Island, only losing the state by a few thousand votes.  As for the rest of the states: 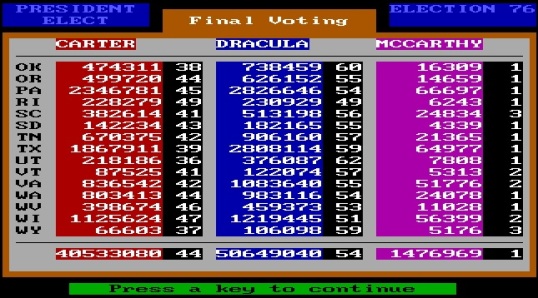 Sorry, Jimmy.  The people have spoken.

2 responses to “Dracula vs. Jimmy Carter: Who Would Win?”