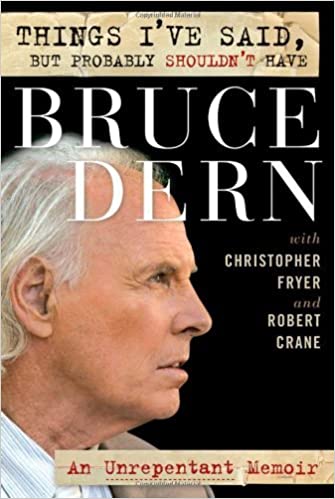 Bruce Dern is an interesting person.

He’s an actor, of course.  He spent a lot of his early career playing bad guys.  He was in a lot of biker films.  He killed John Wayne in a western.  Even Dern’s heroes were often unhinged in some way.  As he aged, he made the transition to becoming a character actor.  He still often plays characters who have their own individual way of looking at the world but now a Dern character is just as likely to be seen dispensing wisdom as he is to be seen killing people.

In real life, Bruce Dern was born into a socially prominent family.  (When Dern was born, his grandfather was serving as Secretary of War in FDR’s presidential cabinet.)  His godfather was Adlai Stevenson, who ran for president a handful of times.  Dern was a championship runner in high school.  When he was 20, he tried out for the Olympics.  In Hollywood, he appeared in both studio productions and independent films.  He was friends with everyone from Jack Nicholson and Dennis Hopper to John Wayne.  He worked for both Robert Evans and Roger Corman.  At the same time that Dern was playing drug-crazed bikers in Roger Corman movies, he was perhaps unique for being one of the few young actors in Hollywood who didn’t do drugs.  As he has commented in several interviews, he played Peter Fonda’s acid guru in The Trip despite the fact that he had never so much as even held a joint.

Bruce Dern is one of those actors who tends to show up in a lot of documentaries about Hollywood in the 60s and 70s.  If you read a book about that era, you can be sure that you’ll come across a lot of quotes from Dern.  Usually, Dern comes across as being both witty and straight-forward.  He’s an opinionated guy and he doesn’t hold much back.  It’s not surprising that he would be someone who many would want to interview.

Things I’ve Said, But Probably Shouldn’t Have is Bruce Dern’s memoir and it’s just as quirky as you would expect it to be.  Now, I should make cleat that the book was published in 2007, which was a a few years before Bruce Dern made his comeback with the Oscar-nominated Nebraska.  It was also written before Dern became a member of the Quentin Tarantino stock company and was introduced to an entirely new generation of filmgoers.  At the time this memoir was published, Dern was a part of the Big Love cast and his last “big” movie was Monster, in which he had a small but memorable role.  Things I’ve Said…. was written before the “resurgence” of Dern’s career and, as such, there are certain parts of the book that almost feel like an elegy.  At times, it’s almost as if Dern is saying, “Okay, I was never as big as I should have been but I still had fun.”  Fortunately, films like Nebraska and others reminded people of just how good an actor Bruce Dern actually is and, even in his mid-80s, he’s a busy character actor.

As you would probably expect, Things I’ve Said is a bit of a quirky book.  If anything, it reads as if Dern just sat down beside you and started talking about his career.  It skips back and forth through time.  Just because a chapter begins by discussing one subject, there’s no guarantee that it’ll stick with that topic.  A chapter about his Oscar-nominated turn in Coming Home also contains his thoughts on Florence Henderson (“A Cloris Leachman type dame …. a real fox”) and the Lord of the Rings trilogy.  Some of his best-known films are mentioned only in passing while others, like The The Incredible Two-Headed Transplant, get an entire chapter’s worth.  He writes about how he came up with the perfect final line for Walter Hill’s The Driver and how he created his most memorable movie psycho, the blimp pilot in Black Sunday.  He writes about turning down roles that were offered by everyone from Woody Allen to Francis Ford Coppola to Bernardo Bertolucci.  (Coppola, Dern writes, offered him the role of Tom Hagen in The Godfather but just as a bargaining tactic to get Robert Duvall to reduce his salary demands.)  Dern writes about his friendship with Jack Nicholson and the other members of the Hollywood counter culture and how he always found himself competing with people like Nicholson and Scott Wilson for roles.  He also discusses how killing John Wayne in The Cowboys led to him receiving death threats and getting typecast as a villain.  Dern seems to be more annoyed by the typecasting than the threats.

It’s an enjoyable read.  Dern comes across as being a genuine eccentric but he’s the good type of eccentric as opposed to the type of eccentric who keeps dead animals in his basement.  He also comes across as being very confident.  He has no fear of saying that his performance saved certain movies.  But you know what?  Bruce Dern has saved a lot of movies.  So, if he’s a little bit overly sure of himself …. well, he’s the earned the right.

One response to “Book Review: Things I’ve Said But Probably Shouldn’t Have by Bruce Dern, with Christopher Fryer and Robert Crane”