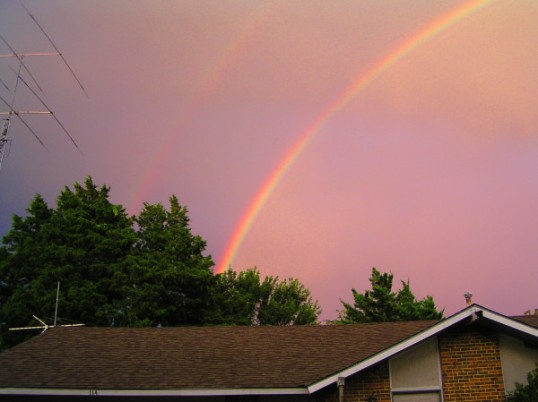 I took this picture a few years ago, on a Saturday.

It had rained all day and when it stopped, I went outside and I snapped this picture of the rainbow.  At the time, I didn’t give much thought to the rainbow.  I thought it was pretty and I figured that I might as well take a picture of it but otherwise, I didn’t really look at it.  I was more interested in how thick the humidity was and how swampy the front yard had become after hours of nonstop rain.  I took my picture and then I went back inside because, even though the rain had stopped, it still didn’t seem pleasant outside at all.

It was only hours later that I looked at the picture and discovered that I hadn’t just taken a picture of one rainbow.  I’d taken a picture of two rainbows.  It was a double rainbow and if I hadn’t taken that second look, I never would have known it was out there.

A second look is always worth it.

One response to “Artwork of the Day: Double Rainbow”