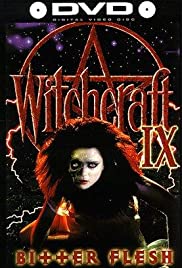 Will Spanner (played, for a second time, by David Byrnes) returns in Witchcraft IX!

Will is still the son of a warlock, he’s still dead, and his girlfriend is still named Kelli (she’s played, this time, by Leah Kourtne Ballantine) but otherwise, the continuity of the entire franchise gets seriously twisted in Witchcraft IX.  Witchcraft VII ended up with Will dead and everyone knowing that Will was dead.  This was followed by Witchcraft VIII, which was a stand-alone film about a different warlock.  Witchcraft IX then begins with no one knowing that Will is dead and an imposter Will living with Kelli and regularly choking her during sex.  Will’s ghost roams the city, trying to get anyone to listen to him.  Though Will was clean-shaven when he died, ghost Will has a beard.

While Will is trying to find someone who can hear him, Detective Lutz (Stephanie Beaton) and Garner (Mikul Robins) are investigating yet another series of ritualistic homicides.  This time, the homicides are connected to an Egyptian cult as opposed to a Satanic one.  Usually, Lutz and Garner would turn to Will for help but, because imposter Will is a jerk, they don’t want anything more to do with him.  Of course, in Witchcraft VII, Lutz and Garner saw Will die but apparently, they’ve forgotten about that and think that he’s still alive.  See how confusing this is?

Will finally does find someone who can hear his voice.  She’s a prostitute named Sheila (Landon Hall) and soon, Will is using her to deliver messages to Lutz, Garner, and Kelli.  He even enters her body at one point.  Witchcraft IX is basically a softcore version of Ghost, with an Egyptian cult thrown in for good measure.

Whatever other flaws they may have had, the previous Witchcraft films all did try to maintain a recognizable continuity.  That’s what made them stand out when compared to other direct-to-video franchises.  Even though the actors changed, Will always remained the same character with the same problems.  In Witchcraft IX, all of that continuity gets tossed out the window.  The one emotionally effective moment of the entire franchise, Will dying and being mourned by everyone who cared for him, is retconned into nothing.

Witchcraft IX suffers from its low budget and its impossible to follow plot but Landon Hall and Stephanie Beaton are surprisingly good as Sheila and Lutz and David Byrnes is a passable hero.  Though Will does come back to life at the end of this one, he would still be absent in the next film.  In Witchcraft X, Detective Lutz would finally get a story all of her own.