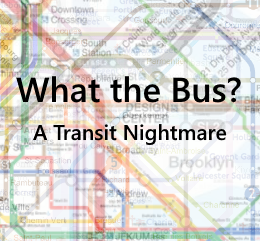 This game is an entrant in the 2020 Interactive Fiction competition.  All of the entrants can be played here.

This game starts off with a premise that anyone has ever had to rely on mass transit can relate to.  You’re waiting for the #44 Bus so that you can ride it to the station where you have to catch your train.  However, while you’re waiting, you get a notification telling you that your bus is running 40 minutes behind schedule!

Do you try to catch another bus?  Do you try to catch a different train?  Or do you just suck it up and wait for your bus to arrive?  Choose carefully because the world is strange and who knows where all of these buses and trains could be going.  I consistently failed to pick wisely and I ended up more lost than I was before.

There are 10 different endings that you can get at the end of this game, depending on which bus or train you decide to take.  Among the endings I’ve gotten, I’ve found myself trapped in a train station and I’ve also entered into a strange parallel dimension.  I have yet to actually get to where I needed to go.  Anyone who has ever had to deal with MTA Maryland or tried to navigate the subways in New York or the Underground in London will be able to relate.  It’s a universal game, one to which we can all relate and which everyone should be able to enjoy.  We’ve all been there.

You can play it here.  Good luck!