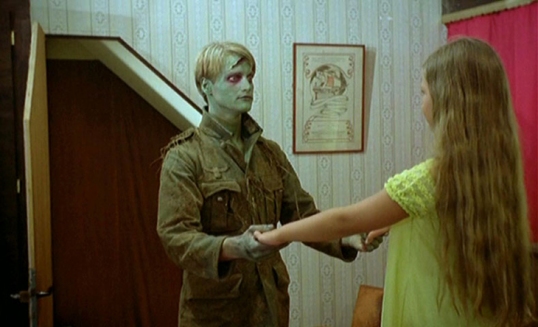 I approach this 1981 Spanish-French film with some trepidation because, while it’s undeniably one of the best known of Eurocine’s low-budget horror films, it was also directed by one of my favorite directors and, by most accounts, it was not an experience that he particularly enjoyed being asked about.  He did not care for this film and (spoiler alert) his name was not J.A. Lazer.

In fact, for several years, it was assumed that this film was actually directed by Jess Franco.  And while it’s true that Franco was originally hired to direct Zombie Lake, he left the project because he said the budget was too low to execute his vision.  Consider that.  A budget too low for Jess Franco!  Franco left the project and went on to direct Oasis of the Zombies.  Apparently, the film’s producers did not understand that Franco had actually left the project because, on the first day of shooting, they were shocked to discover that they didn’t have a director.  In a panic, they called another fiercely independent horror director and asked him to come direct the film.  Jean Rollin agreed.

By his own account, Rollin only had a few days to prepare for shooting and since he had already made a classic zombie film called The Grapes of Death, he didn’t worry too much about trying to do anything too spectacular with Zombie Lake.  He simply filmed whatever scenes were required for the day, played the minor role of doomed police inspector, and, six days later, Zombie Lake had been filmed.

As for the film itself, it takes place in a French village that appears to be exclusively populated by cranky old men and naked young women.  There’s a lake nearby.  Despite seeing (and tossing aside) a big sign with a skull and crossbones on it, one of the naked women decides to go for a swim.  This apparently awakens the green Nazi zombies who lives at the bottom of the lake.  Soon, the zombies are randomly emerging from the lake and killing villagers.  The town’s mayor (Howard Vernon, of all people) is concerned.

It all links back to World War II, when the members of the French Resistance (led by the mayor) gunned down a squad of Nazis and dumped their bodies in the lake.  Somehow, this led to the Nazis coming back as zombies.  One of the Nazis had a daughter with a French woman shortly before he was killed.  Despite the fact that he was killed in 1943 and the movie clearly takes place in 1980, his daughter is only 12 years old.  That’s the type of film that Zombie Lake is.

Watching the film, you can tell why Rollin wasn’t particularly interested in claiming any credit for it.  It’s a messy film, largely because the green zombie makeup keeps washing off whenever the zombies have to emerge from the waters of the lake.  As for the lake itself, the underwater scenes were clearly shot in a swimming pool.  Beyond that, there’s not really any logic as to why the zombies keep emerging from the lake.  Whenever it’s plot convenient, the zombies suddenly emerge and attack anyone who has recently undressed.

And yet, there are some good things about Zombie Lake.  (Shut up, there are too!)  For instance, it’s kind of charming how each actor cast as a zombie brings their own interpretation to the role.  Some of them walk slowly with their arms outstretched.  Others move a little bit stiffly with a thousand yard stare.  Some of them just casually stroll around, doing their business.  As well, we’re so used to assuming that any character played by Howard Vernon is going to be decadent and sleazy that it’s kind of fun to see him playing an outright hero here.  Finally, even the frequent nudity is so gratuitous that it actually become rather humorous.  One could easily use Zombie Lake to play a drinking game.  Whenever anyone takes off their top, drink!

Finally, even though this was clearly just a film he did for the money, there are a few instances where Rollin’s signature style manage to peak through.  For instance, when we first see the Mayor’s office, the camera lingers on all of the historical artifacts on the wall.  The fact that one of the zombies has cloudy memories of his former lover and only wants to see his daughter actually works a lot better than you might expect, largely because that seems to be the only storyline that Rollin — with his fascination with memory and history — seems to really care about.

Zombie Lake is a mess and certainly not representative of Rollin’s best (or more personal) films.  But I still kind of like it.