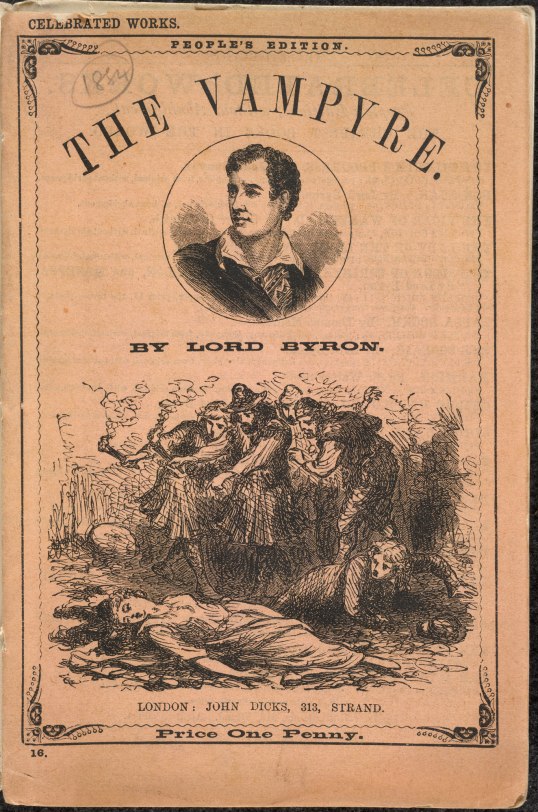 Though The Vampyre was often erroneously attributed to Lord Byron, it was written by John William Polidori

First written way back in 1816, The Vampyre is a story about an amazingly naive young gentleman named Aubrey who becomes friends with the mysterious Lord Ruthven.

Everything about the enigmatic Lord Ruthven would seem to suggest that he’s a vampire but Aubrey never figures that out while he and the nobleman travel across Europe.  Even after an inkeeper’s daughter dies of a vampire attack shortly after telling Aubrey about vampires (and, also, immediately after the sudden arrival of Ruthven), it still doesn’t occur to Aubrey that there might be something strange about Lord Ruthven.  When Lord Ruthven is mortally wounded by bandits, he makes Aubrey swear an oath that he will not tell anyone about Ruthven’s death for a year and a day.  Aubrey promises to keep the oath.

Now, apparently, back in the 19th century, people took those oaths very seriously because, even after Lord Ruthven shows up alive once again and now claiming to be the Earl of Marsden, Aubrey can’t tell anyone that he saw Ruthven die.  Even after Ruthven starts to court Aubrey’s sister with the obvious intention of draining her blood, Aubrey still cannot bring himself to break his oath.  Is it because oaths were really that important or is it that Aubrey himself is as in thrall of Ruthven as his sister?

John William Polidori was a physician and a writer, as well as a contemporary and friend to Mary Shelley, Lord Byron, and Percy Shelley.  The Vampyre was conceived and written as a part of the same contest that saw Mary Shelley write Frankenstein.  Though Polidori’s story is understandably overshadowed by Mary Shelley’s (and, it must be said, Polidori was nowhere near as good a writer as his famous friends), it’s still historically significant as the first “romantic” vampire tale.  It’s the story from which so many others have sprung.

Many have also speculated that the story was based on Polidori’s friendship with Lord Byron, with Polidori represented by the unstable Aubrey while the self-centered but charismatic Lord Ruthven was perhaps meant to be a stand-in for Byron himself.  This may be true or it may not.  (When it comes to Byron, the Shelleys, and Polidori, it’s always perhaps a bit too tempting to read too much between the lines.)

The Vampyre is a historically important piece of work so, if you’re a fan of vampires, you have to read it.  Flaws and all, we owe much to Lord Ruthven and John William Polidori.

One response to “Book Review: The Vampyre by John William Polidori”