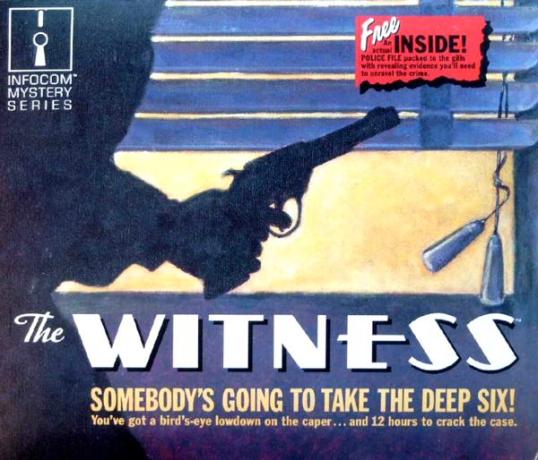 You are a detective, working in 1930s Los Angeles.  One night, you and your assistant, Sgt. Duffy (remember him from Deadline?) are called to the home of Freeman Linder.  Linder is a soldier of fortune whose wife has recently died under mysterious circumstances.  After you arrive and assuming that you are smart enough to follow Linder into his study, he tells you to have a seat while he explains why he needs to be protected from a man named Stiles.  If you don’t take a seat, you’ll end up getting a bullet that was originally meant for Linder.  If you do take your seat, you’ll witness Linder getting shot by an unseen assailant.  You now have 12 hours to explore the house, interrogate all of the suspects (there aren’t many of them), and figure out who murdered Freeman Linder!

The Witness was Infocom’s follow-up to its fabulously successful murder mystery, Deadline.  The Witness is a much simpler and much easier game, though it’s still a good deal of fun.  If Deadline seemed like a big budget MGM extravaganza, The Witness is an entertaining Warner Bros. B-movie.  The mystery at the heart of The Witness is not difficult to solve.  It’s mostly a case of making sure that you’re in the right place at the right time to witness certain events and also making sure that you do certain things in the right order.  The mystery may be easy to solve but getting all of the evidence necessary for a conviction can be tough.

As with most Infocom games, The Witness is well-written and full of memorable details.  The game is set on February 9th, 1938 and, if your detective turns on the radio, he’ll hear programs that actually aired on that date.  The game’s author, Stu Galley, even researched 1930s slang to give the game’s dialogue an authentic feel.  It’s a fun if not particularly difficult game.

The Witness can currently be played over at the Internet Archive. 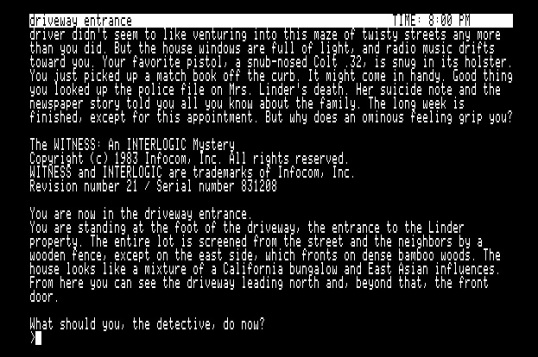