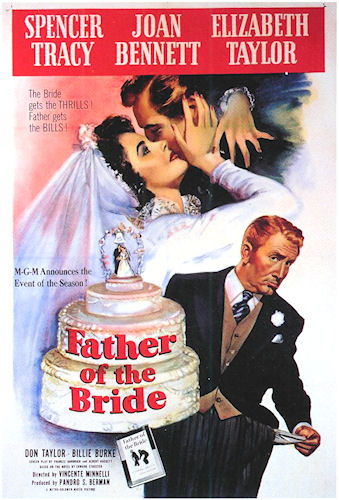 After I watched King Solomon’s Mines, I watched yet another 1950 best picture nominee, Father of the Bride.

In Father of the Bride, Spencer Tracy plays a lawyer named Stanley Banks.  As you might expect of any character played by Spencer Tracy, Stanley Banks is a no-nonsense type of guy.  He’s set in his ways and not particularly enthusiastic about the idea of change.  Stanley has worked hard to get a good job and a nice house in the suburbs.  He loves his wife, Ellie (Joan Bennett) and is a firm but good father to his two boys, Tommy (Russ Tamblyn) and Ben (Tom Irish).  If Stanley does have a soft spot, it’s for his daughter, Kay (17 year-old Elizabeth Taylor).  Stanley admits that he’s always given Kay everything that she’s ever wanted and that she is his favorite of all his children.

However, Kay has been acting strangely as of late.  She just seems to be so happy!  Stanley can tell that she’s in love, though he has no idea with whom.  (He is, however, happy that it’s probably not the bespectacled political radical who Kay apparently dated at some point in the past.)  Finally, during an otherwise typical family dinner, Kay announces that not only is she in love but she’s also engaged to be married!

His name is Buckley (Don Taylor, who would later direct Escape From The Planet of the Apes and Damien: Omen II) and, at first, Kay refuses to even introduce him to her parents.  Eventually, however, Stanley does meet Buckley and he’s happy to discover that not only does Buckley come from a wealthy family but he also owns a small business of his own.

However, just because Buckley is the perfect 1950 man, that doesn’t mean that the wedding is going to be easy.  As a befuddled Stanley watches, the wedding grows more and more elaborate (not to mention, expensive!).  All of the expected complications ensue: Buckley and Kay have a fight, a wedding planner makes things difficult, and Stanley does not immediately get along with Buckley’s parents.  But, for the most part, Father of the Bride is about Stanley struggling to accept that his daughter has grown up and is ready to start a life of her own.

Father of the Bride is a sweet little comedy, though it seems a bit out-of-place as a best picture nominee.  It’s definitely a film of its time.  For all of the scenes of Stanley worrying about the extravagance of modern weddings, there’s not a subversive moment to be found in Father of the Bride.  (One can only imagine what Nicholas Ray or Douglas Sirk would have done with the material.)

Fortunately, this is also a Spencer Tracy film and whatever gravitas that the film may have comes from Tracy’s honest and straight forward performance.  Tracy never begs for laughs but he gets them anyway, because of the honesty that he brings to the character.  Perhaps his best moment comes after Buckley and Kay have had a fight.  After comforting his daughter, Stanley discovers that Buckley is at the front door.  At first, the protective Stanley tells Buckley that Kay doesn’t want to see him.  Suddenly, Kay comes running down stairs and embraces Buckley.  Between sobs and kisses, Buckley and Kay dramatically swear to each other that they will never fight again.  The camera pans over to Stanley, standing a little to the side and listening.  At first, Stanley seems befuddled by how overdramatic the two of them are acting over a relatively minor fight but there’s also just a hint of sadness in Stanley’s eyes as he realizes that his daughter truly has moved on.

Father of the Bride was nominated for best picture but it lost to the far more subversive All About Eve.