Sorry, but there’s going to be a few of these in a row because I have a backlog of Hallmark movies on my DVR that really need to be cleared out. In other words, prepare for death by a thousand greeting cards. 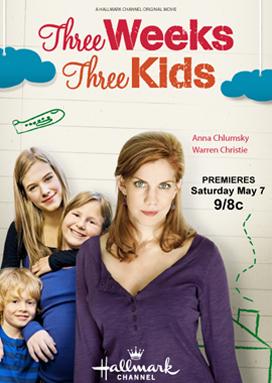 Three Weeks, Three Kids (2011) – Anyone my age remembers Anna Chlumsky from My Girl (1991). It’s nice to see her as an adult. This movie introduces us to Chlumsky’s character Jennifer who we are supposed to believe is a wee bit irresponsible, or at least hasn’t really grown up. Well, no fear because her sister is going to go on vacation and needs a babysitter quickly for her three kids. Of course the experience is going to give her a kick in the butt. It also gets her off the boyfriend that isn’t right for her and moves her onto the one that is. Oh, lord! This is a Hallmark movie. I know there was incest in For Better Or For Worse, but I didn’t intend that pun. Well, the movie isn’t all about her. Her sister just can’t relax on the vacation and the movie is about getting her to calm down and enjoy her life and marriage more too. There is a little corny twist at the end, but I’ll leave that for those who want to see this. The movie is decent. 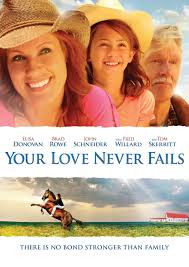 Your Love Never Fails (2011) – However, I can’t say they same for this one. This is just propaganda. Honestly, the pastor in this says almost word for word a speech given in a very blatant piece of propaganda called Every Young Woman’s Battle. When you boil off the attempt to couch it, the movie is about a woman who has a successful job in the city, but is dragged back to rural Texas by her husband and is legally coerced into spending time with him. The pastor gives a speech that says that no relationship is perfect, but that’s human nature. Just let God into your heart and that will fix the issue. Yeah, in other words, once you’re married, if the relationship isn’t working, then that just means you’re not a good Christian. He even talks to her and says she clearly still has feelings for him because she is choosing to stay even though we know she is required to stay because the court said so. There is no reason to watch this. It’s no wonder that Hallmark aired this last month under the title of A Valentine’s Date rather than the original title that is still displayed onscreen. If I want propaganda of this sort then I will watch Deception Of A Generation thank you very much. At least that’s hilarious rather than uncomfortable. They say Smurfs are homosexual zombies in that video.

Kiss At Pine Lake (2012) – This one is much better. The only issue I picked up is a minor one. Mia Kirshner has put on a little weight. It’s only noticeable because she used to be particularly petite. This works to her advantage because it helps to make her character more believable as having aged from the younger version of herself in the movie. Also, the girl who plays her younger self bears a resemble to Kirshner. Barry Watson on the other hand doesn’t seem to change. I swear, he looks the same as he did in the first episode of 7th Heaven. It also doesn’t help that we are familiar with the way he looked on that show. On top of that, the guy who plays him as a kid doesn’t look like him at all. Luckily, the flashback scenes are short and there are very few of them so it doesn’t really harm the movie at all. As for the story, it’s about a boy and girl who liked each other at summer camp as kids, but never followed through. Their lives bring them back around to each other at the same camp many years later, but this time things work. Nice and simple. Of the four here, this is the one to watch.

Real Murders: An Aurora Teagarden Mystery (2015) – TV Movies should not have complex plots. Commercials ruin them. I wish I could describe the plot to you, but I quickly lost track of the investigation. Didn’t help that it seems to move at a breakneck pace. It actually starts off feeling like it’s going to parody these types of murder mysteries. The murder is committed, but even the person being killed doesn’t seem to care. Then the characters act in humorous ways once the murder is discovered. Teagarden (Candace Cameron Bure) dives in and moves very fast. She also talks about historical murders like you’re talking to Quentin Tarantino about movies. Quick and with a great deal of knowledge. If you are able to follow the plot better than I did, maybe catch it without commercials, then you will probably enjoy it more. Still, I just can’t recommend this one at this point. I wonder if the other Aurora Teagarden movie is better.