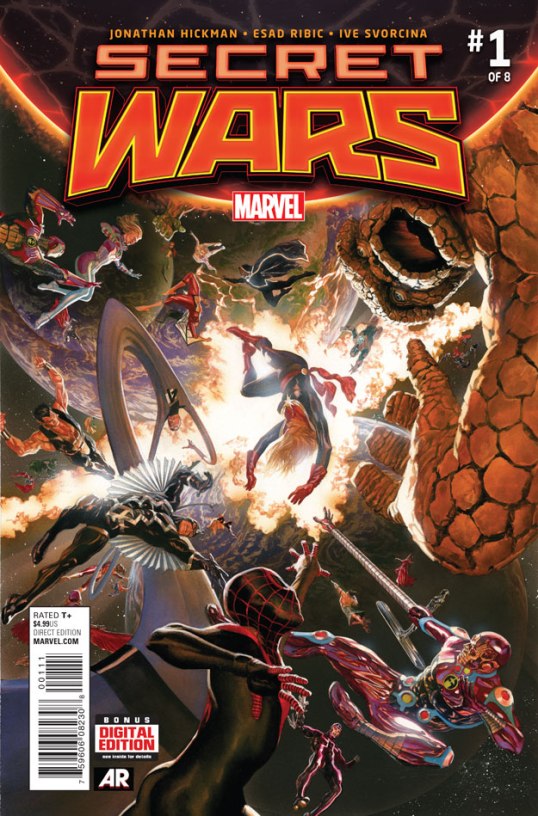 As my review of DC’s Convergence a few weeks back clearly gave away, I’m not much of a fan of these company-wide “blockbuster” crossover events in comics. I mean, seriously, what’s to like? The main titles are invariably a bunch of useless fight sequences strung together under the flimsiest of pretexts; the tie-in books either have almost nothing to do with said main title or else tie into it too much; the cover prices for everything are jacked up by a buck or two; and in the end, the status quo that we promised would be “forever changed” either isn’t at all, or ends up being pretty much like the old within the space of a few months.

In short, they’re a hustle any way you look at it.

People are wise to this by now, of course, which is why both Marvel and DC have promised that their latest cash-grabs really will shake things up in a fundamental way, and in Marvel’s case they’ve even pretty much given away how the just-released-today Secret Wars is going to end : the so-called 616 and Ultimate Universes will be no more, consolidated down into one, single, “new” universe (except they’re not calling it the “New Universe” because they’ve had bad luck with that name already).

So — the only reason to read Secret Wars (which, by the way, has nothing to do with the original cross-over series of that name and frankly doesn’t even make any logical sense because events in this series are hardly “secret” in the least) is to see exactly how they go about the business of universal consolidation. If that grabs your fancy, then by all means, shell out $4.99 for this over-sized first issue, and $3.99 for each subsequent issue, and knock yourself out. If you think you might have better things to do with your time and money, though, heed my warning and simply stay away. 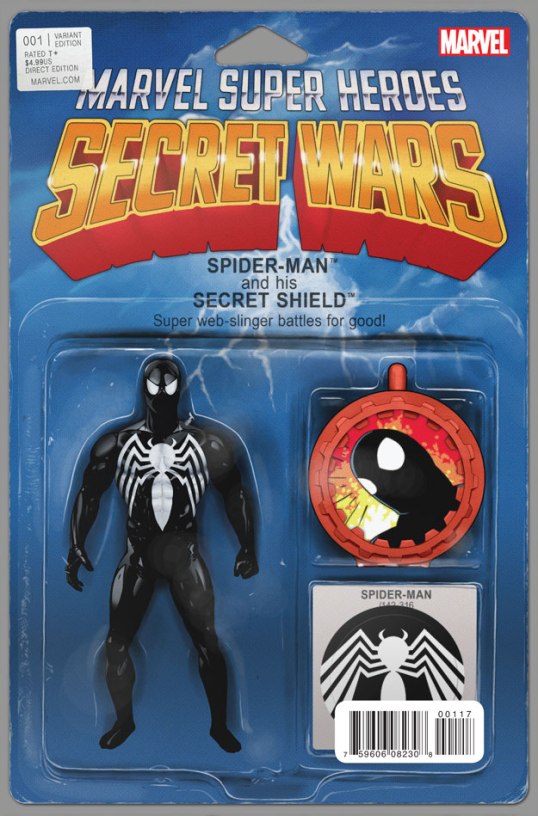 For the discerning sucker with more money than sense, Marvel has offered up no fewer than 11 different covers for this extravaganza (I’ve included Alex Ross’ main painted cover, and the coolest of the bunch, John Tyler Christopher’s “toy variant,” with this review), and rest assured, once you open the book up, the feeling of “this is some big, momentous shit” will be shoved down your throat from the word “go.” I have no real problem with the intro page that Marvel puts in most of their monthly books, and a “title page” here and there doesn’t bother me, but Secret Wars #1 contains no fewer than seven more or less wasted pages — an “intro” page, a double-page title spread, a “cast of characters” page, an “in memoriam” page marking the passing of the 616 and Ultimate Universes at the end, and two all-black splash pages designed to signify said mutual ending right before the “in memoriam” page. I mentioned before that this was an “over-sized” first issue, and now you know why : when you subtract all that nonsense, plus the cover art reproduction page, plus the full-page “next issue” blurb, plus the six-page “free” preview of Uncanny Inhumans #0, essentially what you’ve got left is a standard-sized comic book. That you just paid a buck extra for.

I could forgive all of that, though, if the standard-sized-comic-hiding-inside-a-bigger-one was actually any good. Unfortunately, Secret Wars #1 isn’t.

Which isn’t meant as a knock of any sort on artist Esad Ribic — his work here may not rise to the level of prior efforts like Thor & Loki : Blood Brothers, but, as you can see, it’s still pretty good. Ive Svorcina employs a solid and effective color palette, as well, so all in all, you’ve gotta say that the book looks pretty good — unfortunately, the story is pure, unmitigated crap.

Apparently this “arc” actually got started some time ago in  Secret Wars writer Jonathan Hickman’s various Avengers books, so if you haven’t read those, you’re going to be lost from the outset here, with no quarter given by either Marvel editorial or the creators to help bring you up to speed. I know Hickman loves his so-called “design pages” — especially in his Image books — but in all the wasted space in this issue, they couldn’t be bothered to include so much as a single “our story thus far —” paragraph? Please.

Bad form, to be sure, but it’s bad form in service, as you’d expect, to the almighty dollar — you see, Marvel have just released a trade paperback collection of all that Secret Wars prelude shit that they want you to spend $29.99 on.

The bulk of the “action” here is just a bunch of big-city disaster sequences and some half-baked plan launched by the 616 Reed Richards and Black Panther to save the “scientific elite” while the grunts from both their universe and the Ultimate one literally fight to the death during something less-than-ominously titled an “incursion” (which apparently involves both universes trying to co-exist on the same — I dunno, dimensional plane or something) to decide which version of reality will win out and which will be completely fucking remorselessly slaughtered. Damn, I knew Reed and T’Challa were 1%ers, but this is some seriously cold-blooded shit even for that crowd.

Let’s just fast-forward to the end, shall we?  The Richards/Panther plan doesn’t work, Cyclops unleashes the “Phoenix Force” at the same time the scheme falls short, and then — total darkness. But we know it’s not over because we know there are seven issues left to go, plus a boatload of tie-in books like Secret Wars : Battleworld, Secret Wars Journal, and, just to drive home the point that Marvel has no original ideas left whatsoever, re-makes of Infinity Gauntlet, Civil War, and Old Man Logan that are all gonna dove-tail in with this mess, as well. Thanks for the five bucks, see you back at the comic shop next week for even more!

On a purely economic level, of course, this all makes a mercenary kind of sense — most of these titles will sell, and the main Secret Wars book will sell a ton. But creatively, none of this can be justified in the least. The “reality vs. reality” premise is virtually indistinguishable from DC’s already-running (and equally lousy) Convergence, Hickman’s script is a dour, humorless, senseless cluster-fuck, and nobody makes anything happen at all in this first issue — everything just happens to them. Plus, we get to  find out that, when push comes to shove, most of these characters are assholes more concerned with saving their own kind (our social, economic, and super-powered “betters”) than actually, ya know, protecting us like they always claim they’re out to do. As a comic book, then, Secret Wars #1 is a complete failure of imagination, common sense, and even basic human decency. As a makeshift blueprint for would-be totalitarian elitists who want to make certain that all of us “pawns” are sacrificed to protect the “queens and kings,” though, who knows? Maybe it’ll come in handy when the shit hits the fan.