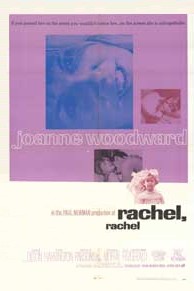 I recently saw the 1968 best picture nominee Rachel, Rachel on TCM and I have to say that, at first, I was rather underwhelmed by it.  Don’t get me wrong.  I thought it was well-acted.  I thought it managed to capture a lot of details of small town life.  I thought that, for a film made in 1968, it was surprisingly mature and nonjudgmental when it came to exploring feminine sexuality.  I was even more surprised to see a nearly 50 year-old movie that actually featured a sympathetic portrayal of a lesbian.  Just consider that the homophobic The Sweet Ride was released at the same time and you can see just how unusually progressive Rachel, Rachel was as far as this was concerned.

And yet, when I first watched Rachel, Rachel, it was difficult for me to connect with it.  And I really wasn’t sure why.  I mean, it is true that Rachel, Rachel is one of those films that moves at a very deliberate post but, trust me, I’ve seen and enjoyed many films that were a helluva lot slower than Rachel, Rachel.  But, for whatever reason, it took me two viewings to really appreciate Rachel, Rachel as a surprisingly sensitive character study.

The film is about Rachel (Joanne Woodward), a 35 year-old virgin who lives with her mother in a small Connecticut town.  Since the death of her stern and overbearing father, Rachel has lived with her mother.  She’s a withdrawn and meek woman who has frequent fantasies that veer between unrealistic happiness and nightmarish morbidity.  Her best friend, another unmarried teacher named Calla (Estelle Parsons), invites Rachel to a revival meeting and, for the first time in her life, Rachel actually allows herself to be openly passionate.  After the meeting, Calla suddenly kisses her.  Shocked, Rachel temporarily ends their friendship.

Even before the revival meeting, Rachel has run into Nick (James Olsen), a friend from high school who is in town to visit his family.  After getting kissed by Calla, Rachel ends up turning to Nick and losing her virginity to him.  Rachel believes that she’s in love with Nick and is soon fantasizing about their future children.  However, it’s obvious to everyone (except for Rachel) that Nick doesn’t quite feel the same way…

When I first saw Rachel, Rachel, I had a hard time relating to the character of Rachel.  I watched and, as much as I tried to be sympathetic, I still found myself wondering how anyone could possibly still be a virgin at the age of 35.  I mean, I understand that times were different and all but seriously!  I guess back then, people actually were serious about the whole “no sex before marriage” thing.  (That probably explains why people used to get married when they were 17.)  The film is full of largely silent flashbacks to Rachel’s youth and we see that she was raised in an emotionally repressed environment.  She was raised to wait for the right man to come along and, when he didn’t, Rachel eventually found herself as a 35 year-old virgin.

And, without getting too TMI here, let’s just say that I couldn’t relate to Rachel’s situation.

But, when I watched the film for a second time, I discovered that even if I don’t know what it’s like to be a 35 year-old virgin, a lot of Rachel’s experiences were, in their way, universal.  Consider the scene at the start of the film where Rachel fantasizes that everyone in town is staring at her as she walks down the sidewalk, all because her slip is showing.  Who hasn’t, at some point in their life, felt like everyone was staring at her and judging?  And, for that matter, who hasn’t had a Nick in their life?

Interestingly enough, Rachel, Rachel was the directorial debut of the iconic actor Paul Newman.  One thing that I’ve noticed about films directed by actors (especially first films) is that the actor-turned-director often seems to feel that he has to prove himself by indulging in as much showy cinematic technique as possible.  (And if you don’t understand what I mean, check out George Clooney’s Confessions of a Dangerous Mind.)  And, as much as I hate to admit it because I’ve never read one negative word about Paul Newman, I have to admit that Newman’s direction was one of the reasons why, at first, I found myself feeling detached from the film.

While Newman tells most of Rachel’s story in an admirably straight-forward way, he also included just a few too many arty flashbacks and fantasies.  Some of the fantasies — like the one at the start of the film that I mentioned two paragraphs ago — are handled well but others are distracting and they remind the viewer that they’re watching a film.  And Rachel, Rachel is a film that works best when it’s naturalistic.  Whenever it gets too self-consciously cinematic, it takes the viewer a few minutes to get sucked back into Rachel’s story.

Rachel, Rachel is a flawed and imperfect film but it’s still worth catching the next time that it shows up on TCM.