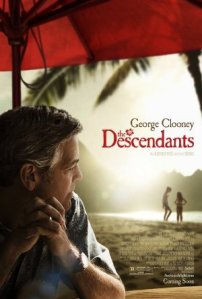 One thing that always happens at Oscar season is that certain films will be so embraced by the critical establishment that even daring to challenge their opinion to even the slightest degree will be interpreted as some sort of cinematic heresy.  These are the films that make you feel as if Roger Ebert is standing directly behind you, holding a gun to your head and commanding you to enjoy and be moved by what you’re watching.  Last year, that film was The Social Network.  This year, at least for me, it’s The Descendants.

One reason why The Descendants has been so praised by the critics is because it’s seen as being a film about “real people” and “real life.”  It’s advertised as a film with no easy villains and no easy heroes.  This is the type of film that people tend to praise for not falling into specific genre.  However, those critics are wrong because The Descendants is a pure genre film, make no mistake about it.  It is the latest entry in the Mediocre White Man film genre.  The MWM genre tends to center on middle-aged white guys who are comfortably upper middle class, have quirky relatives, and have been afflicted by ennui.  The protagonist of the MWM film usually narrates the action for us and tends to spend a lot of time explaining how he’s managed to structure his life for maximum efficiency while, at the same time, shutting himself off emotionally from the rest of the world.  Over the course of the MWM film, the protagonist is usually forced to deal with some crisis that makes him realize that 1) he’s getting old, 2) his safe life has become a prison, and 3) there’s not much he can do about it.  The MWM film will feature at least one or more scenes featuring our protaganist either aimlessly running or standing still on an escalator with a blank expression on his face while some old song from the 60s or 70s plays on the soundtrack.

MWM films tend to do well critically because most critics are mediocre white men themselves.  They also do well with the Academy, probably for the same reason.  And, don’t get me wrong.  There have been some excellent MWW films released over the past decade.  Sideways, Up in the Air, Thank You For Somoking, and even Michael Clayton are all excellent MWM films.  The problem isn’t that The Descendants is a MWM film, the problem is that it doesn’t really bring anything new to genre and even the film’s most effective moments feel awfully familiar.

In The Descendants, George Clooney (a mainstay of MWM genre) plays Matt King, a wealthy attorney living in Hawaii.  Matt’s wife is in a boating accident that leaves her brain-dead.  Matt, who has always been “the backup parent,” finds himself forced to take care of his two daughters (Amara Miller and Shailene Woodley) while going from island to island to inform people of Elizabeth’s impending death.  Along the way, he discovers that Elizabeth has been having an affair with a sleazy real estate agent (Matthew Lillard) and he’s forced to confront the fact that he hasn’t always been the best husband or father.  There’s a lot of quirky and funny moments and there’s a lot of sad moments but they’re never feel quite as genuine as the film seems to believe.  Instead, they often feel more like they were just put there to satisfy the demands of the MWM genre.  The end result is a film that too often seems to mistake ambiguity for insight and which ultimately seems to be more safe than honest.

That doesn’t necessarily mean that The Descendants is a bad film.  Much like The Social Network, it’s a good film that also happens to be very overrated.  Director Alexander Payne keeps the story moving and, as predictable as the film may be, it’s still well-acted and occasionally well-written.  Though I thought a lot of the dialogue was a bit too spot-on perfect (this is a film where even the inarticulate characters sound calculated), the script features enough good one-liners to keep the film entertaining.  Amongst the cast, Robert Forster is poignant as Elizabeth’s grieving father (and his “I’m going to hit you line,” is perfectly delivered) and Judy Greer makes the most of the thankless role of Lillard’s wife.

In the end, I guess the Descendants is a lot like an old middle school crush.  He’s so cute and appealing that it takes a while of digging and soul searching before you can admit that there’s really not much going on there.

4 responses to “A Dangerous Quickie With Lisa Marie: The Descendants (dir. by Alexander Payne)”