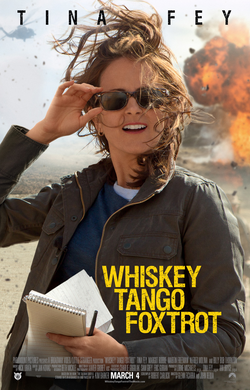 Some day, someone will get around to making the ultimate Tina Fey movie, which will basically just be 4 and a half hours of people talking about how much they love Tina Fey while Tina makes silly faces in the background.  Until that day comes, viewers will just have to settle for Whiskey Tango Foxtrot.

In Whiskey Tango Foxtrot, Tina Fey plays Tina Fey playing real-life journalist, Kim Baker.  When the film starts, Kim accepts an assignment as a war correspondent in Afghanistan.  Though she starts out as neurotic and intimidated, Kim soon steps up and emerges as a passionate and committed journalist, one who is dedicated to revealing the truth — both good and bad — about what’s happening in Afghanistan.  Helping her along the way is a BBC reporter, Tanya Vanderpool (Margot Robbie) and a Scottish photographer named Iain (Martin Freeman).  Iain and Kim may be attracted to one another but Kim has a boyfriend (Josh Charles) back in New York.  How long do you think it takes for Kim to catch her boyfriend cheating via Skype?

Whiskey Tango Foxtrot is one of those movies that you just know was made to be an Oscar contender.  Not only does it deal with a big important subject but it stars a popular performer in a change-of-pace role.  Except, of course, it’s not really that much of a change-of-pace.  Tina Fey’s a good actress but you never forget that you’re watching Tina Fey.  You never think to yourself, “Kim is caught in the middle of a firefight” or “Kim is getting addicted to the rush of being a war zone.”  Instead, you think, “Any minute now, Tina Fey’s going to start shooting a gun and it’s going to be funny because she’s Tina Fey.”  Towards the end of the film, when a U.S. soldier who has lost his legs tells Kim to never stop trying to tell the people the truth about what’s happening in Afghanistan, you don’t think, “Don’t give up, Kim!”  Instead you think, “Wow — so that soldier lost his legs so that Tina Fey could have an Oscar moment.”

If I haven’t already made it clear, Whiskey Tango Foxtrot is an extremely uneven film, one that never seems to be sure if it wants to be a relationship comedy, a media satire, or a serious look at the realities of war.  The film works best when it concentrates on the friendship between Tanya and Kim and it’s nice to see a film about two women who are colleagues and friends.  When Tanya first showed up, I was worried that the film would devolve into one of those “Women can’t work together” diatribes or that Tanya would immediately be set up as some sort of mean girl rival for Iain.  Instead, the film explores how women support each other through even the most difficult of circumstances.  But then there’s other scenes that just don’t work as well, like the scenes with Alfred Molina as an Afghan politician who has a crush on Kim.

Whiskey Tango Foxtrot has its moment but ultimately its too uneven to be of much consequence.