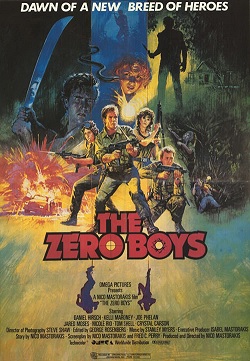 When a paintball team known as the Zero Boys wins the big tournament, they decide to celebrate by spending the weekend in the woods with their girlfriends.  Accompanying the group is Jamie (Kelli Maroney), who was put up as a side bet by her boyfriend, who just happens to be the wannabe Nazi dork who lost the tournament.  The wilderness fun and games take a disturbing turn when the group comes across a deserted cabin and decide to camp there for the night.  The cabin belongs to family of hillbilly survivalists (one of whom is played by Martin Sheen’s brother, Joe Estevez) and they don’t intend to let anyone leave alive.  Soon, the Zero Boys are forced to put their paintball knowledge to the test in a real battle for survival.

The Zero Boys is one of those films that always used to come on television when I was growing up and I would always watch it because I thought it was going to be a standard, Friday the 13th-style slasher film.  When I was a kid, I would always end up getting annoyed with the film’s deliberate pace and its weird mix of the action and slasher genres.  I would usually watch for about an hour and then I would change the channel and try to find something better.  I thought The Zero Boys was just that, a big zero.

Now that I’m older, I realize that I was wrong and I better appreciate The Zero Boys and the way that it pokes fun at both the action and the slasher genres.  The Zero Boys opens with a really intense battle scene, between the Zero Boys and Casey, who is wearing a swastika armband.  It plays out like a standard Cannon action film, up until the moment that the Zero Boys catch up to Casey and shoot him in the head with a paintball. Our “heroes” are not mercenaries or former vets looking to rescue their brothers-in-arms from a POW camp.  There’s not a single Chuck Norris among them.  Instead, they’re just a bunch of dorky teens who are good at paintball and think that they have survival skills.  (One of them looks at a picture of Rambo and says, “Sly, eat your heart out.”) The movie goes on to further upend the audience’s expectations by introducing Jamie, a heroine who is anything but the typical, virginal final girl.  When it becomes obvious that the group is being stalked by a group of killers, the Zero Boys and their girlfriends actually fight back and it’s a definite change of pace from other slasher films of the era,  When it comes to horror films, The Zero Boys has more in common with The Hills Have Eyes than with Friday the 13th.

The Zero Boys is an action/horror hybrid that is willing to poke fun at itself.  It’s also one of the many superior genre pictures that Kelli Maroney made in the 80s.  Between this film, Chopping Mall, and Night of the Comet, Kelli Maroney was the crush of every 80s and 90s kid who spent too much time searching HBO and Cinemax for R-rated horror films.  She was cute but tough and, even if no one else in the movie realized it, she could definitely take care of herself.  Whether fighting malfunctioning robots, zombie scientists, or killer hillbillies, there was no one better to have on your side.

One response to “The Zero Boys (1986, directed by Nico Mastorakis)”