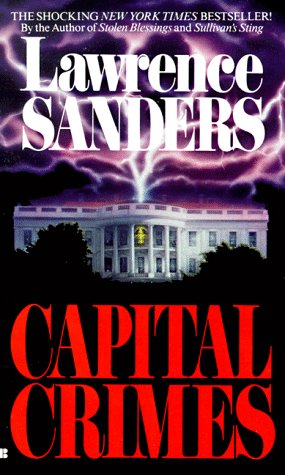 Tell me if the plot of the 1990 novel, Capital Crimes, sounds familiar.

The President of the United States is struggling.  The economy is bad.  The U.S. is long ground internationally.  The President’s approval ratings are plummeting.  The members of his own party are searching for a way to get rid of him.  However, the President himself is more concerned about the health of his son, a hemophiliac who seems destined to suffer an early death if he’s not somehow cured of his condition.

Everything looks hopeless until the President meets Brother Kristos.  Brother Kristos is a wild holy man from the backwoods, a sensualist who drinks vodka, believes that the best way to worship is to have an orgy, and who claims that he has a direct line to God and that he can heal the President’s son.  Kristos not only makes the claim but he backs it up by actually doing it.  The President and his wife soon become dependent on the mysterious Kristos.  Kristos goes from being an obscure cult leader to one of the most powerful men in the country but is he a servant of God or the Devil?  While Kristos sets about seducing all of the women in Washington, others try to investigate his background.  Is Kristos a charlatan or does he truly have magical powers?

If this sounds familiar, that’s probably because you’re familiar with Rasputin, the Russian monk who became a shadowy and much-feared influence on the family of Nicholas II, the final Tsar of Russia.  In fact, Capital Crimes so closely follows the story of Rasputin that you kind of have to wonder why no one in the book ever seems to pick up on the connection.  Russia exists as a rival to the United States in Capital Crimes and, as such, one assumes that Rasputin must have existed as well.  And yet no one in the book ever says, “Hey, remember when this happened before and it didn’t end well?  Maybe we shouldn’t invite the unwashed holy man to live in the White House?”

Capital Crimes is one of the books that I found in my aunt’s paperback collection.  I read it a few weeks ago and, beyond the fact that it was so obviously based on the story of Rasputin, there wasn’t anything particularly memorable about it.  The reader is continuously told that Brother Kristos is incredibly charismatic and that his piercing stare can hypnotize almost anyone but telling and showing are two different things and Kristos is such a ludicrous figure that it’s hard to take him seriously.  (Then again, I imagine many initially said the same thing about Rasputin.)  The book flirts with suggesting that Kristos actually does have supernatural powers but it neve really commits to the idea, which is a shame.  If you’re going to write a book about a Rasputin in the White House, you might as well go all out and fully embrace the supernatural aspect of the story.  Instead, the book gets bogged down in the political machinations of all the people who would like to replace the president.  It’s a bit dull.

The book is credited to Lawrence Sanders, who I know wrote quite a few best sellers and who is usually listed among the better thriller writers.  Capital Crimes feels extremely sloppy and derivative so I’m going to assume that it was written strictly for the money.  That’s not necessarily a criticism, of course.  Money’s a good thing!  But so is an interesting plot.

One response to “Novel Review: Capital Crimes by Lawrence Sanders”