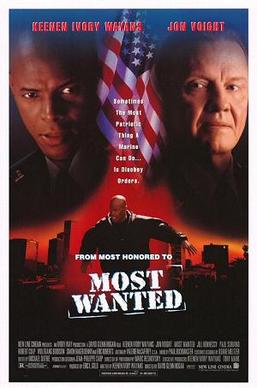 James Dunn (Keenan Ivory Wayans) is an army sergeant with a talent for getting framed for crimes that he didn’t commit.

During the Gulf War, Dunn’s superior officer orders Dunn to shoot a shepherd boy.  Dunn refuses and, when the two men get into a fight over a gun, his commanding officer is accidentally shot and killed.  The army refuses to listen to Dunn’s explanation.  He’s convinced of murder and sentenced to death.  However, while Dunn is on his way to Leavenworth, he is rescued by Col. Casey (Jon Voight).  Casey explains that he is giving Dunn a chance to join a super secret vigilante group that targets evil doers.  Yes, Dunn will be expected to assassinate people but they’ll all be bad.  With no other options available to him, Dunn agrees to work for Casey.

Dunn’s first target is the corrupt owner of a pharmaceutical company (played by Robert Culp) but — surprise — it turns out that the target was actually the First Lady and that the entire plan was to set up Dunn as a patsy!  Now a “most wanted” fugitive, Dunn is forced to go on the run with a doctor (Jill Hennessy) who recorded the assassination with a camcorder.  (Remember, Most Wanted was made during the days of the landline phones.)  With Casey and his second-in-command (played by Wolfgang Bodison) determined to kill him and with only Paul Sorvino (as the head of the FBI) doubting the official story, Dunn has to find a way to reveal the truth.

Though he was subsequently overshadowed by his brothers, Damon and Marlon, Keenan Ivory Wayans was a really big deal in the 90s.  As the man behind In Living Color, he proved that black comedians and writers could be just as funny (and, in many cases, funnier) than their white counterparts over at Saturday Night Live.  It can be argued Jim Carrey, Jamie Foxx, David Alan Grier, and Jennifer Lopez would not have the careers that they have today if not for Keenan Ivory Wayans.  (All of them first found fame as members of the In Living Color ensemble, Carrey, Foxx, and Grier as cast members and Lopez as a “fly girl.”)  Most Wanted was Wayans attempt to transform himself into an action hero (perhaps not coincidentally, a year before Most Wanted was released, Damon Wayans had a minor hit with Bulletproof).

Keenan Ivory Wayans not only starred in Most Wanted but he also wrote the script and it’s interesting just how straight the action is played.  It would be natural to expect Wayans to turn the movie into a spoof but there’s little intentional humor to be found in Most Wanted.  Most Wanted takes itself seriously and the end result is an adequate but hardly memorable action movie, with Wayans jumping off of buildings and fighting off the bad guys.  The action scenes are well-shot if not particularly imaginative but, unfortunately, Wayans doesn’t really have the screen presence necessary to be a believable action hero.  Both the character of James Dunn and Wayans’s performance are just too bland to really be compelling.  Far more interesting are Jon Voight and Paul Sorvino, who are both entertainingly hammy in their roles.

There’s one good scene in Most Wanted, where Dunn finds himself being chased by what appears to be the entire population of Los Angeles.  Otherwise, this one is adequate but forgettable.

One response to “Most Wanted (1997, directed by David Hogan)”