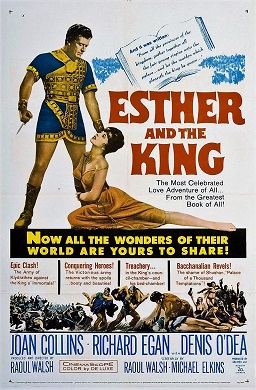 The 1960 Italian-American co-production, Esther and the King, opens in ancient Persia.  King Ahasuerus (Richard Egan) has just returned from conquering Egypt and he is angered to discover that his wife, Vashti (Daneila Rocca), has been cheating on him with not just his main advisor, Haman (Sergio Fantoni), but also with the entire palace guard as well.  After the Queen shows her further displeasure with the King by doing a topless dance in front of the entire royal court, the King banishes her from his life.

Since the king now needs a new wife, every attractive woman in the land is dragged off to the palace so that she can audition for the role.  Among those forcibly recruited is the strong-willed Esther (Joan Collins), who was previously engaged to a rebel named Simon (Rick Battaglia).  What the king doesn’t know is that Esther is both Jewish and the cousin of Mordecai (Denis O’Dea), who has recently offended Haman by refusing to bow down before him.  Haman and his wife (Rosalba Neri) are now plotting to execute all of the Jews is Persia.  Despite her love for Simon, Esther remains in the competition to become the Queen so that she can save her people….

There are a few things that you immediately notice about Esther and the King.

First off, it’s an extremely loose adaptation of the story of Esther, one that is designed to make the King out to be a far more sympathetic figure than he actually was.  Whereas the King actually banished his wife after refused to attend a banquet where the drunken King wanted her to pose naked, Esther and the King presents the King as being the wronged party as his wife is literally cheating with every available man in the kingdom.  (Ironically, the film actually presents the King as being forced to banish his wife after she removes her top during a banquet whereas, in actuality, it was her refusal to do so that led to be her being exiled.)  The film also adds in considerably more battles and a lot more court intrigue as all of the king’s potential wives compete for his attention.  And, of course, then there’s Esther’s fiancee, Simon, who does not appear anywhere in the original text.

The other thing that you immediately notice about Esther and the King is that ancient Persia apparently looked a lot like ancient Rome.  That’s not surprising when you consider that this was an Italian co-production and that Esther and the King is as much of an old school peplum film as a biblical adaptation.  This is a biblical adaptation that is as concerned with sword fights and banquets as it is with prayer and religion.

Regardless of whether it’s historically accurate or not, it’s an entertaining film.  Admittedly, Richard Egan is a bit of a stiff as the King and Joan Collins really doesn’t bring much beyond beauty to the role of Esther.  But the sets are properly ornate and the costume are to die for.  Mario Bava was the film’s cinematographer (and some sites credit him as being the film’s co-director as well) and Esther and the King is gorgeous to look at.  This is one of those historical epics where almost everything feels appropriately big, from the palaces to the emotions to the melodrama.  The supporting cast is largely made up of Italian actors who all appear to be having a great time playing up the drama of it all.  Sergio Fantoni is wonderfully hissable as the evil Haman.  (Boo!  Haman!  Boo!)  Rosabla Neri also has some memorably manipulative moments as Zeresh, the wife of Haman (boo!)  For those of us who like big and not necessarily historical accurate epics about the ancient world, Esther and the King is a lot of fun.

One response to “Film Review: Esther and the King (dir by Raoul Walsh)”