“Nom nom nom nom,” says that monster under the sand.

And that’s all you really need to know about the 1981 film, Blood Beach.

Blood Beach takes place on a beach that also happens to be a hunting ground for this mutated worm thing that lives underground.  Basically, whenever anyone takes a stroll on the beach, they get sucked down into the sand and, for the most part, they’re never seen again.  Sometimes that’s not a bad thing, as in the case of a wannabe rapist who ends up getting castrated while being pulled down into the sand.  But, far too often, the victims are innocent people who were just walking their dog, chasing after their hat, or searching for buried treasure.

The beach becomes so well-known for being a death trap that the locals start to call it Blood Beach but, for some reason, that doesn’t seem to stop people from wandering out on the sand at inopportune times.  I mean, it would just seem logical to me that if there’s a monster killing people on the beach then maybe it would be a good idea to avoid the beach for a while.  I mean, you could go see a movie or you could lay out and work on your tan in your back yard.  Believe it or not, you do have the option of not going to a monster-infested location.

Strangely, there’s one person who is always on the beach but never gets killed.  That’s Mrs. Selden (Eleanor Zee), a somewhat odd woman who always seems to be nearby whenever someone is getting dragged into the sand but who never gets attacked herself.  Interestingly, Mrs. Selden never seems to be particularly concerned by all the carnage around her.  (One victim is even killed while specifically checking to make sure Mrs. Selden is okay.)  I kept expecting some sort of major twist where it was revealed that Mrs. Selden was a witch or something but it never happened.

Now, you would think that the presence of an underground monster would be the perfect excuse to call in the national guard but instead, the local police (led by John Saxon’s Captain Pearson) handle it.  Sgt. Royko (Burt Young) heads up the monster investigation, which in this film means that he kinda of stumbles from scene-to-scene, never looking particularly impressed by or interesting in anything that’s happening around him.  If anything, Royko seems to be annoyed that he’s having to give up time that he could be using to drink beer and watch TV and that attitude makes Royke the hero of this film.  Forget the scientist who wants to understand where the monster came from.  Forget the habor cop who wants to rekindle things with an old flame.  Royko doesn’t care about science or love.  He just wants to blow stuff up, which makes him the perfect audience surrogate 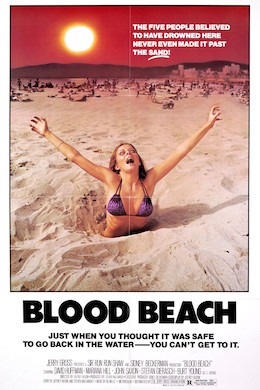