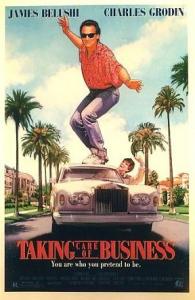 Jimmy Dworski (Jim Belushi) is a convicted car thief who only has a few days left in his criminal sentence but still decides to break out of prison so he can go see the Cubs play in the World Series.  Spencer Barnes (Charles Grodin) is an uptight ad executive who needs to learn how to relax and have a good time.  When Spencer loses his organizer, Jimmy finds it.  Before you can say “The prince and the pauper,” Jimmy has access to all of Spencer’s money and the mansion that Spencer is supposed to be staying at over the weekend.  While Spencer tries to survive on the streets and track down his organizer, Jimmy is living it up, spending money, impressing a Japanese businessman (Mako), romancing the boss’s daughter, and taking care of business.

Made in the uncertain period between the end of the culture of 80s materialism and the start of the 90s indie boom, Taking Care of Business is a rip-off of Trading Places that came out six years too late to be effective.  Everything that needs to be known about Jimmy and Spencer is apparentl from the minute that Charles Grodin’s and Jim Belushi’s names appear in the credits.  Grodin was usually the best when it came to playing uptight yuppies but he seems bored in Taking Care of Business.  Belushi mugs through his role, overplaying his character’s blue collar roots.  The movie builds up to a huge confrontation between Belushi and Grodin but it never really delivers, instead devolving into a predictable buddy comedy, complete with a trip to Wrigley Field and an elaborate plan to sneak Belushi back into prison before the warden (Hector Elizondo) discovers that he’s been gone for the weekend.  Taking Care of Business has a few laughs but it’s never as good as the BTO song.