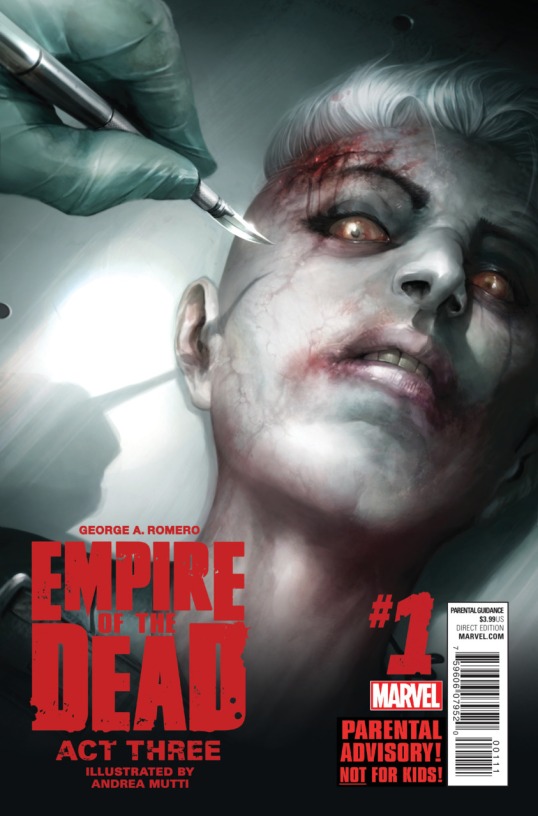 When last we left the denizens of a zombie-and-vampire-infested future New York at the end of issue five of George Romero’s four-color ongoing undead epic Empire Of The Dead, it was the dead (okay, yeah, bad pun intended) of winter (in the real world — specifically, in the hemisphere of the real world where I happen to live) and all of our principal characters were in a series of rather-to-highly precarious positions (in the fictional world). After a brief hiatus in publication to “gear up” for the next five-part run, it seems as though everyone is still in a precarious position of one sort or another in the fictional world, but spring has definitely arrived in the real world, and with it comes some changes in the creative personnel involved on this title.

Most noticeably, as was the case with the second act,  we’ve got a new artist for George Romero’s Empire Of The Dead : Act Three in the form of one Andrea Mutti, a name that’s probably new to most readers, but I think folks are going to like what he (yes, Andrea’s a guy) has to offer — Mutti first came to my attention for his work on Boom! Studios’ fun little zombie-themed four-parter The Returning, and has since popped up as a fill-in artist on issues of Evil Empire and Batman Eternal, and while his style isn’t quite as refined as that of EotD‘s first illustrator, Alex Maleev, there’s definitely a heavy Maleev influence here that’s readily apparent from the word go. Dalibor Talajic’s art on Act Two certainly improved as things went on, but a return to a more “sketchy” and horror-centric style is a move in the right direction, in my view, so props to Marvel editorial for making the change. A new artist on each arc seems to be the order of the day with this book, but if Mutti were to hang around for the fourth (and, as far as I know, final) act I certainly wouldn’t complain. Empire Of The Dead is looking shadowy and creepy again, and that’s as it should be.

Also new to the party is cover artist Francesco Mattina (I swear, the Italians are taking over this series!), and from what I can see so far (and you can, too, since the cover’s right at the top of this review) he’s certainly more than up to the task. Xavier has never looked so awesome as she does on this cover, wouldn’t you agree?

And speaking of covers — we get a variant this month, as well, by Phil Noto, this one focusing on the ever-devious Mayor Chandrake and spotlighting his unique brand of domestic troubles. I’ve included it right beneath this paragraph, and while I think it’s pretty good on the whole, it’s certainly not up to Noto’s usual standard, in my own humble opinion. Needless to say, I opted for Mattina’s main cover. 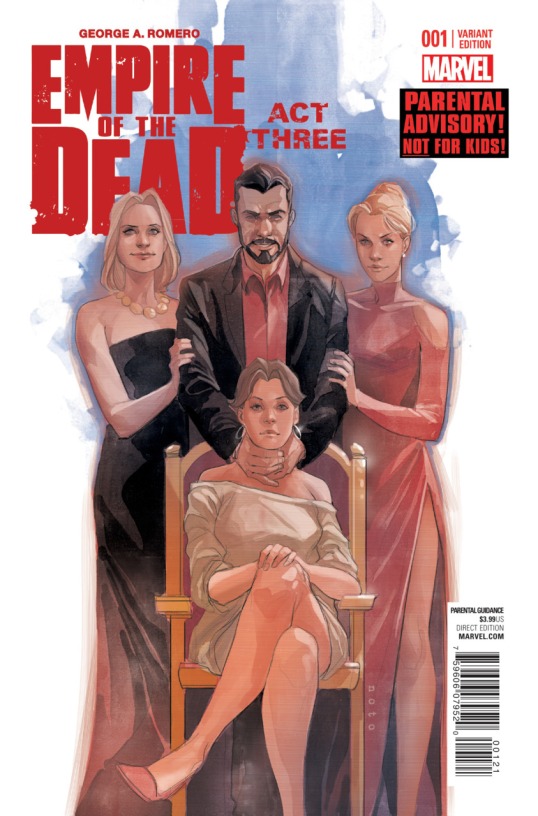 As the spotlighting of Xavier on said main cover would indicate, she’s the main focus this time around, as this issue takes her from the sidelines and moves her squarely front and center. She’s dead — again — but appears to be unwilling to stay down — again. Could it be there’s even more to her than we’d previously been led to believe? Why, yes, it could — and as she “progresses” from Dr. Penny Jones’ operating table to a holding stall beneath the coliseum, clutching her young friend Jo’s bag the entire time, she finds herself “graduating,” if you will, to the role of the zombie that everyone’s  talking about. Many readers found the former SWAT officer to be little more than a female stand-in for Day Of The Dead‘s legendary Bub, but this issue makes it crystal clear that Romero has bigger plans in store for her, to put it mildly. The big “gotcha” moment that serves as this installment’s cliffhanger is all about her, and I’m still kicking myself for not seeing it coming earlier (although I should clarify and say that by “earlier,”  I mean “in an earlier issue,” as opposed to “earlier in this one,” because Romero, unfortunately, telegraphs this ending a bit too early in the proceedings here).

As far as everybody else is concerned, our two ostensible “leads,” the aforementioned Dr. Jones and “zombie wrangler” Paul Barnum, pretty much tread water this time out, serving mainly as conduits for communicating Xavier’s situation/potential transformation, but Detective Perez’s investigation into New York’s missing children epidemic takes a fairly major leap forward here, and the political intrigue between Chandrake and his rival, Chilly Dobbs, yields some interesting developments, as well — I won’t say more than to hint that ol’ Chilly may be more of a literal puppet than we’d previously surmised. Fans of Jo will be pleased to learn (hope this isn’t giving too much away) that she’s also alive and well — at least for now.

As Noto’s cover variant clues us in on, there’s  some serious tension brewing between Chandrake and his wife on the home front, and all in all one is left with the impression that the clock is definitely (and loudly) ticking against the mayor, the only question is what’s going to bring him down first — his political opponents, or his wife. Maybe both? Maybe neither? It’ll be interesting to find out, especially given that Dixie Peach and her southern-fried crew of hell-raisers seem to be sidling up ever closer to the “anti-Chandrake” brigade.

All in all, then,  Empire Of The Dead : Act Three is off to a fairly solid start. The various plotlines are (for the most part) picking up steam as they converge, we’ve finally got a zombie at the forefront, and the art fits the tone of the story much better. Let’s see where the next four segments take us.