In honor of the opening of the new American version of Godzilla, Chiller is showing a marathon of Godzilla films today. While I was out and about during the first few films, I did make it home and turn on the TV in time to catch Godzilla, Mothra, and King Ghidorah: Giant Monsters All-Out.

That Godzilla is one moody lizard!  Half of the time, he’s Earth’s protector and you can’t help but love the big guy, no matter how many cities he destroys.  However, whenever Godzilla is in a bad mood — well, that’s when you better start looking out.

2001’s Godzilla, Mothra, and King Ghidorah: Giant Monsters All-Out Attack finds him in one of his bad moods but, at least he has an excuse.  He’s been possessed by the spirits of Japanese soldiers who were killed in World War II.  Convinced that Japan has forgotten them and their sacrifice, they are now determined to use Godzilla to get their vengeance.

Fortunately, there are three ancient guardian monsters who, once awoken, can protect the Earth from Godzilla.  Those three monsters are a dinosaur named Baragon, Mothra the giant Moth, and Ghidorah, the three-headed dragon with no arms.  With Godzilla attacking, it’s up to Ghidorah to save mankind and…

Seriously, what the Hell…

Well, it really doesn’t matter.  You don’t watch a Godzilla film for continuity.  You watch them to enjoy all of the rubber-suited mayhem and that’s exactly what this film delivers.  And you know what?  Godzilla is actually a lot better at being a villain than a hero.  Whereas the heroic Godzilla always had to watch his step to make sure that he didn’t actually step on any of his human friends, the villainous Godzilla does not care.  Villainous Godzilla is a force of pure destruction and, as a result, is a lot more exciting to watch than heroic Godzilla.

And, perhaps not coincidentally, Godzilla, Mothra, and King Ghidorah: Giant Monsters All-Out Attack is one of the more entertaining entries in the Godzilla franchise — a nonstop thrill-ride of monster mayhem that also happens to feature interesting and compelling human characters as well.  Seriously, try not to be emotionally moved by the scenes of reporter Yuri and her father Admiral Tachibana working through their relationship while Tokyo burns around them.  There’s a reason why this movie ends with a close-up of a beating heart!

And, it should be noted, it also happens to have the best title of any film in the Godzilla franchise. 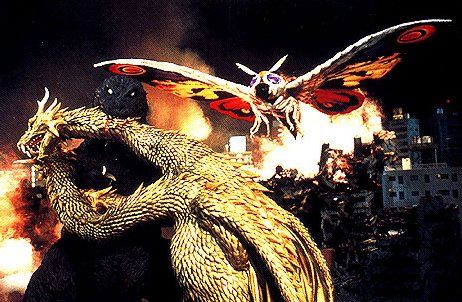