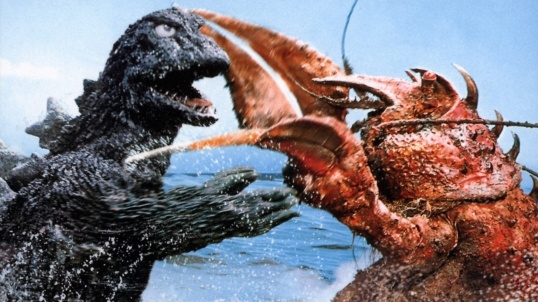 With the latest version of Godzilla set to be released in a little over a week’s time, we’ve been taking a look back at some of previous adventures of the king of all monsters.  Today’s movie is the 7th Godzilla film, Godzilla vs. The Sea Monster.

First released in 1966 (and also known as Ebirah, Horror of the Deep), Godzilla vs. The Sea Monster opens with a young man named Ryoto who is desperately looking for brother, Yata.  Yata is a fisherman who has gone missing at sea.  Everyone else assumes that Yata is dead but Ryoto knows that if he can just find a boat, he can set sail and rescue his brother.

But where and how can Ryoto get a boat?

Well, Ryoto happens to spot a dance marathon being broadcast on television.  First prize is a yacht!  Ryoto runs down to the dancehall, just to discover that the contest has already been going on for three days and that it’s too late for him to enter. 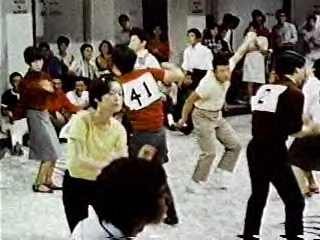 While at the dance, Ryoto meets Ichino and Nita, both of whom have already lost their chance to win the yacht.  However, Ichino and Nita take sympathy on Ryoto and decide to take him to the docks so that he can see the yacht that he could have won if only he had been able to enter the contest.  (If you’re thinking to yourself that this doesn’t make any sense and seems like an awfully complicated set up for a Godzilla movie — well, you’re right.  Get used to it because this is about as logical as any of the characters in this film get.)

Once they board the yacht, they’re confronted by a man named Yoshimura, who is carrying both a rifle and a briefcase full of money.  As they stare at each other, a news report comes over the radio.  It appears that there’s been a bank robbery.  Yoshimura assures them that he’s not the bank robber and then, for some reason, invites them to spend the night on the yacht.

When everyone wakes up the next morning, they discover that the yacht is now floating out in the middle of the ocean.  That’s right — Ryoto has set sail and apparently, he just assumed that his three new friends would want to come along with him.

Anyway, long story short — the boat gets destroyed by a combination of a storm and a giant lobster (that would be Edirah) and our four “heroes” end up washed up on Devil’s Island.  As they investigate their surroundings, they discover that the island is controlled by a terrorist organization known as Red Bamboo.  (We know that Red Bamboo is evil because one of its leaders wears an eye patch.)

Red Bamboo, it turns out, has been kidnapping the natives of Infant Island and putting them to work on Devil’s Island.  Now, if you’ve seen any previous Japanese monster movies, you might know that Infant Island is also the home of Mothra, a giant moth who is occasionally Godzilla’s ally.  The natives — both those who have been enslaved and those left on Infant Island — are busy praying for Mothra to come rescue them.

At this point, you may be tempted to repeat, “But where’s Godzilla!?”

Don’t worry, Godzilla does eventually show up.  It turns out that he’s on Devil’s Island, as well.  However, he’s asleep.  Our four “heroes” decide that the best way to defeat Red Bamboo and save the slaves would be to wake up Godzilla…

Okay, so this is a weird one.  The film takes a while to get going, plot threads are raised and abandoned almost at random, and, once he does wake up, Godzilla doesn’t really act much like himself.  (That could be because Godzilla vs. The Sea Monster was originally written to be a King Kong movie.  That would certainly explain why Godzilla becomes infatuated with an escaped slave named Dayo.) 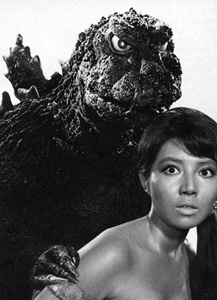 But, with all that in mind, Godzilla vs. The Sea Monster has its charms.  In many ways, I would compare it to Godzilla vs. Hedorah, in that the film is hardly Godzilla at his best but, at the same time, it has enough odd moments to keep things interesting.  Ebirah may not qualify as one of Godzilla’s best opponents but he still has his moments.  His first appearance — in which a giant claw reaches out of the ocean to grab that stolen yacht — is undeniably effective.  Meanwhile, Red Bamboo makes for an enjoyably silly organization of evil doers.  They’re like an amazingly inefficient version of Hydra.  Their island headquarters is the epitome of 1966 evil chic and you have to appreciate the fact that not even they seem to be sure just what exactly their master plan entails.

And finally, there’s that big dance number at the beginning!

Seriously, you can’t go wrong with a random dance number…