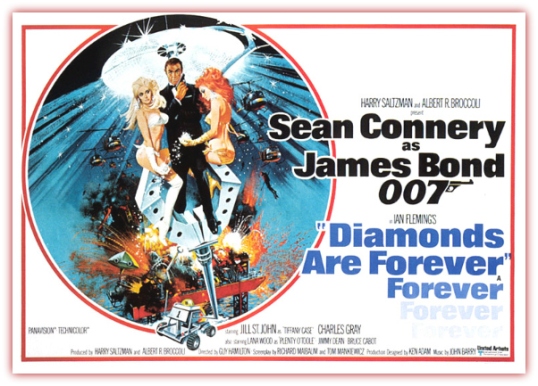 I think it’s a well-known fact that the Austin Powers series was spoofing the spy film of the 60’s and 70’s with it’s main target for laughs being the iconic James Bond character and his international adventures of action and intrigue. The James Bond films with each successive entry became more and more fantastic as the megalomania of each new villain became more and more cartoonish and over-the-top and the gadgets themselves started entering the realm of science-fiction (for that time and era, at least) and back-of-the-comic-book ingenuity. I think the tipping point for the series that took James Bond from action thriller to spoofing it’s own past was with Sean Connery’s last official film as James Bond with Diamonds Are Forever.

To say that Sean Connery was truly getting tired and bored with playing the character James Bond on the big screen would be an understatement. His previous Bond entry with You Only Live Twice showed him pretty much disinterested with the role and one would almost think he was phoning in his performance. After that film Connery had announced his retirement from playing Bond, but after George Lazenby also retired from the role after just one film Connery was soon back for one more ride on the James Bond train.

Diamonds Are Forever once again pits James Bond against his arch-nemesis, the leader of SPECTRE and feline connoisseur, Ernst Blofeld. This time around the role of Blofeld was played by the actor Charles Gray and the film does a good job in explaining why the character has been played by so many different actors in each entry he appeared in. It is in this early sequence in the film that we begin to see that this latest James Bond entry had jumped the shark when it came to trying to keep things even remotely believable. It’s the film’s biggest flaw an, at the same time, what made it such an interesting, fun ride.

Even the plot of the film owes more to the spoofs of the Blofeld character by way of the Austin Powers films as Bond must try to stop SPECTRE from using smuggled South African diamonds from being used to create  weaponized satellite with a massive “laser” that SPECTRE will use to destroy the nuclear arsenal of every superpower then auction off the rights to be the only nuclear power to the highest bidding country. It’s pretty much the the basic foundation of what would be the plot for the first Austin Powers, but with this film filmmaker Guy Hamilton still tried to treat the script as something that was of the serious Bond when it was more 60’s camp through and through.

Diamonds Are Forever may be the weakest of all the Connery Bond films, but it’s groovy sensibilities that celebrated the 60’s (despite the film having been made in 1971) psychedelic, swinging lifestyle poked fun at Bond’s predilection as a suave and charismatic womanizer that wouldn’t have looked out of place in a 60’s love-in. Even the action sequences was something that looked more humorous than thrilling whether it was Bond escaping SPECTRE henchmen on a moon buggy to the inept duo assassins Mr. Wint and Mr. Kidd looked more at home in an action comedy than a series that was known for serious action.

I would be remiss to not mention that this was the only time the Bond series had a redhead as a Bond Girl in the vivacious form of Jill St. John as Tiffany Case. I would also like to think that the other Bond Girl in the film, played by Lana Wood (Natalie Wood’s younger sister), was also a redhead but I’m not entirely sure since most audiences probably didn’t pay too close attention to Plenty O’Toole’s hair color. Either way this would be the only Bond film that would cast what fellow writer Lisa Marie calls the 2%.

Diamonds Are Forever might not have been the sort of return Sean Connery envisioned for himself when he agreed to return as James Bond after taking a film off, but then again this wouldn’t be the first time he would retire from the role only to come back again. Yet, despite all it’s flaws (there were many of them) the film does entertain though probably not in the way it’s filmmakers hoped it would. I do believe that it was this film that finally brought in Roger Moore as the next Bond, but also convinced the film’s producers to tailor the Bond films using some of the humorous aspect of Diamonds Are Forever but tempered to accompany the action in the story.

James Bond will soon return in Live And Let Die….