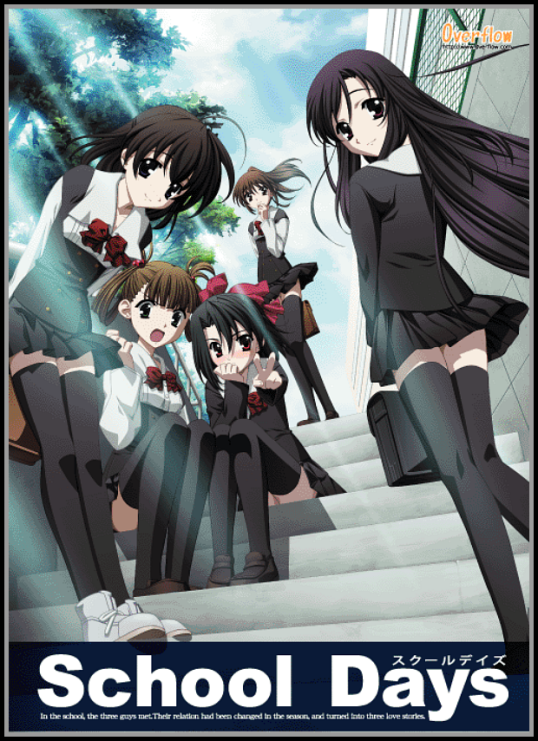 For our latest Anime of the Day I have chosen the very controversial title School Days which aired from July through to September of 2007.

The series was adapted by anime studio TNK from the visual novel and eroge of the same title published by the company Overflow. School Days was your typical “harem” visual novel eroge where the main protagonist (most of the time male though there’s a few where it’s reversed and it’s a female) becomes involved with several of the female characters in the game. The goal of these eroge was to try and navigate through the many relationships between the protagonists and the many female characters around him (usualy in a sexual nature) and get the perfect ending which always ends up being the so-called “good ending”.

With School Days the main protagonist is one Makoto Ito who starts off as being a mild-mannered and polite high school student. This doesn’t last long as he become embroiled with the many female classmates he’s known for years and those he recently met. To say that the character of Makoto becomes addicted to having sex with his female classmates would be an understatement.

While there are several female characters in School Days who become involved with Makoto in one way or another it’s the duo of Kotonoha Katsura and Sekai Saionji who become rivals for Makoto’s affection. Just like the visual novel the anime series was adapted from (the visual novel was also adapted as a manga series) the complex and increasingly malicious attitudes by some of the leads in the series would lead to more than one tragedy for all involved. This is a series which starts off as a light-hearted harem title but as the series progresses towards its climactic finale it somehow takes a huge turn into the darkside that by the time it does make that turn the viewer has become so invested in the characters and the story that it becomes a major shock to the system.

School Days has become controversial since its release due to a real-life killing where a young high school girl kills her father with an axe which some thought as being too similar in tone to a sequence in the series. The controversy from such a real-life event caused the tv station broadcasting the series to replace almost half the running time of the final episode with an image of a nice boat and classical music playing in the background. This became such a major internet meme that saying “Nice Boat” has become the comment of choice when discussing controversial scenes and plot developments of any series that’d be ripe for studio censorship.

The series in all its form also emphasizes the character stereotype of yandere. School Days definitely has its major share of yandere characters and the many different endings to the visual novel shows how some of the yandere characters in the story deal with the callous way Makoto has dealt when dealing with their affections towards him. It gets bloody, violent and more than just a tad crazy-insane.

Four years ago, I was in Recycle Books in Denton, Texas and I came across a book called something like “Unknown Legends of Rock and Roll.”  The book came with a CD that featured music by some of the bands featured in that book.  The first song on that CD (and my personal favorite) was Smashed Blocked, a song from a band called John’s Children.