Do you know the exact moment when you sold your soul?  Or when your soul is forfeit are you so far gone that you don’t notice?

Dick Grayson started as the damaged hero and ended with nothing.  He’s a tragic hero whose pride destroyed him.  He became seduced to believe that his pain allowed him to decide life and death, causing him to commit the paragon of sins: Patricide.  As you look at the 11 episode arc, you see Dick losing his identity as Robin, and in doing so, he loses his moral compass and his soul.

I reviewed these last two episodes together because they flow as one episode.  It could’ve been titled The Last Temptation of Dick Grayson.  Unfortunately, he made the wrong the decision and we see his soul die. Not only was the story brilliantly written, but these two episodes had a creepy factor that was palpable.  In fact, the story began and ended in a haunted house.

Rachel has been trying to keep from using her powers because she can’t control them and they seem inherently evil because … well … they are.  Rachel’s mom as it turns out is still all about Trigon AKA Satan and she really wants her some Satan.  In order to do it, she needs to get Rachel to use her evil mojo and pull her dad out of a mirror.  Rachel’s mom accomplishes this by infecting Gar through a haunted mirror.  Rachel’s mom tricks Rachel into pulling her dad out of Hell because only he can save Gar.  Well, she does and Gar is healed by Trigon, but evil is now unleashed upon us.  How did this work?  Rachel was manipulated and seduced.  She knew that her father was likely pretty pretty bad, but she was willing risk us all to help her friend, making the act selfish, but disguised as altruistic.

Dick Grayson enters and he is in his idealized reality, but not all is well.  First of all, he’s in Southern California, which is almost a hell dimension all on its own.  Dawn is his wife and he’s got another baby on the way AND they both have left the hero business behind to pursue a life of….well let’s just assume real estate? They probably have some really cool pictures of themselves on local benches.  In fact, Minka Kelly should really be on ALL advertisements at all times.

Jason Todd arrives in a wheel chair and informs Dick that Batman has run a muck, killing the villains instead of beating them to near death, which is …. better?   Dick returns to Gotham and is continually manipulated by Satan that Bruce can’t be stopped without killing him.  Dick fights his way through the mansion and upon seeing that Starfire was killed by Batman, he gives into his wrath and commits patricide.  By giving into this final act of evil, Dick becomes Trigon’s minion.  Dick even gets evil eyes, but I didn’t not to use a screen cap of that because it might spoil visually.

These episodes and the season as whole take a deep dive into PTSD and human weakness.  Dick was filled with bitterness and pain and when he burned his Robin suit he also burned the last vestige of his hero identity.  When he kills Bruce, he wasn’t in costume; he was just angry Dick Grayson who wanted to get back at his Dad.  Dick answers the question for us posed at the beginning:  we don’t know when our soul is forfeit because we left all our scruples behind getting to that point, therefore, we become a husk of a human being capable of anything. 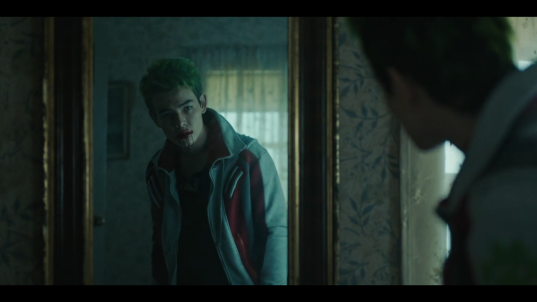 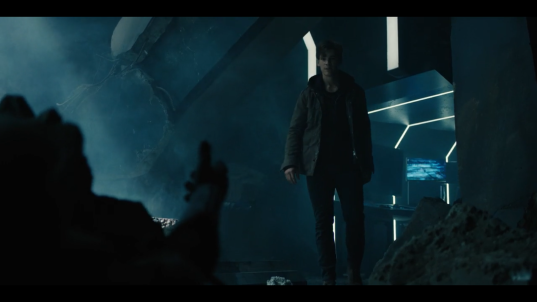