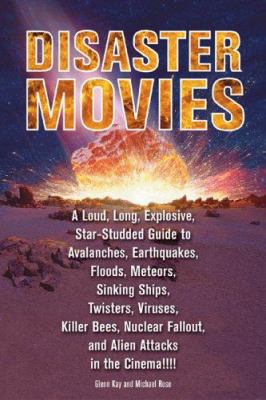 What’s the only thing scarier than being trapped in a real-life disaster?

Being trapped in a disaster movie!

First published in 2006, the full name of this guide to the disaster genre is Disaster Movies: A Loud, Long, Explosive, Star-Studded Guide to Avalanches, Earthquakes, Floods, Meteors, Sinking Ships, Twisters, Viruses, Killer Bees, and Alien Attacks In The Cinema.  That title tells you pretty much everything you need to know about this affectionate but likably snarky look at all the movies that have been made about earthquakes, fires, torandoes, and …. well, basically all the stuff listed in the title.

On a movie-by-movie basis, this guide reviews disaster movies that are both well-known and obscure.  All of the big ones — Airport, Towering Inferno, Titanic, Independence Day, Poseidon Adventure — are listed here but, even more importantly, so are the obscure ones.  In fact, the book features a lot of films that you might not have heard about but will probably want to track down after you’ve read about them.  The reviews are respectful to the conventions of the genre while also acknowledging the obvious, i.e., a lot of these are not good films.  But the authors understand that sometimes, a bad disaster film can be even more enjoyable than a good one.  The Poseidon Adventure is a classic of sorts but how about Beyond The Poseidon Adventure?  How about Flood!, a film so exciting that it even has an exclamation mark in the name?  How about Avalanche, the best of the snowy disaster films?  What about Meteor?  If love The Swarm but you can’t appreciate Meteor, I don’t know what to tell you.

Disaster Movies is a well-written guide.  Most readers will discover the existence of at least one film that they previously knew nothing about.  And, hopefully, they’ll be inspired to watch a few of the film reviewed in this book.  In a disaster, it’s always helpful to be prepared.