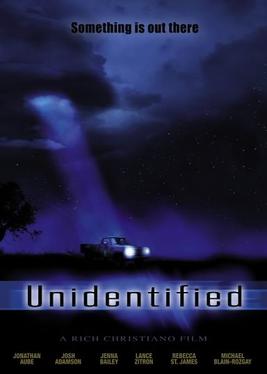 All across America (but mainly in Texas and California) people are seeing bright lights in the sky and reporting that they’ve been abducted by aliens.  Most of the abductees stop telling their stories after they are visited by mysterious men in black but enough are willing to talk about their experiences that eventually, Both Sides Magazine decides to do a story on it.

Keith and Brad are assigned to the story.  Keith is a nice but mild guy who is skeptical about aliens but he’s determined to give everyone a fair hearing,  The film suggests that this is perhaps because Keith’s a Christian, even though he doesn’t read his Bible every night and sometimes entertains doubts as to whether he’s truly going to Heaven.  Brad, meanwhile, is a hardcore Atheist who is rude to everyone and believes in absolutely nothing.  Brad hates the idea of having to do any stories that involve small town America.  Go to Texas to talk to UFO abductees?  That’s not Brad’s thing.  (Brad is supposed to be very unlikable but the actor playing him looks a bit like Owen Wilson so it’s hard to hold anything against him.)

Still, Brad and Keith do talk to an auto mechanic who says that he was abducted.  And then they talk to two Louisiana fishermen who were also abducted.  Keith thinks that their experiences are worthy of a feature article.  Brad vehemently disagrees.  Fortunately, it turns out that the magazine’s religion editor, Darren, supports Keith.

Why is the Religion Editor so interested in UFOs?  It’s not because he believes in aliens.  (“The Bible doesn’t say anything about life on other planets,” he explains.)  Instead, it’s because Darren thinks that the UFOs are actually being used by Satan to draw people away from God.  He points out that most of the people who have been abducted are either not religious or heavily into the paranormal.  Brad thinks that Darren’s full of it but, fortunately, a government informant shows up and reveals that not only is Darren correct but that the UFOs are going to be used as a way to explain away the Rapture!

As you probably guessed, this is a Rich Christiano film.  First released in 2006, Unidentified was Christiano’s second feature length film and …. well, it’s not very good.  On the one hand, you have to appreciate Christiano’s ambition and his attempt to make a sci-fi film on a low budget.  On the other hand, Unidentified is painfully slow, poorly acted, and it’s hard not to notice that, for a major magazine, it appears that only six people work at Both Sides.  Let’s just say that this film is no Spotlight when it comes to realistically portraying the life of a journalist.  Darren makes it a point to try to convert everyone that he meets while investigating the story.  Honestly, this seems like the type of thing that would get most journalists fired from a secular magazine.  For whatever it’s worth, I do think the story itself had potential but the execution is definitely lacking.  That said, the film does work in a reference to Orson Welles’s War of the Worlds broadcast.  I’m not sure how Orson would have felt about that.

For the record (and since this review is running a little short), I personally don’t believe in UFOs but I have read several books about them.  It amuses me that aliens are apparently always coming to our planet to tell us to stop being so war-like or to take better care of the environment.  Hey, Mr. Martian — WORRY ABOUT YOUR OWN PLANET!

One response to “October Positivity: Unidentified (dir by Rich Christiano)”