“If you want to taste the night, come downstairs.”

A young woman relaxes with her friends at a waterfall.  She sees a funeral procession passing by and cheerfully announces, “A funeral!  It brings good luck!”

One person who would disagree with that would be the girl in the coffin.  She’s just the latest villager to have been found passed out in a field in the middle of the night, lacking blood.  The locals say that there’s a vampire on the loose.  The local doctor insists that the girl is just anemic and will recover in ten days.  Instead, the girl ends up in a coffin, only opening her eyes while being carried to her grave.  From her point of view, we watch as clumps of dirt are tossed onto the coffin, one after another until finally all is dark.

At night, she leaves her grave and runs into the horribly disfigured vampire who previously bit her.  He greets her and tells her to lie down in his coffin.  As soon as she does, he drives a take through her heart and says that he must remain “the master of my world.”

It’s a strange world.  In the village, a dance troupe is, for some reason, staying at a villa belonging to an older man (Pier Ugo Gragnani) who is called both “grandpa” and “The Professor.”  (Despite the film’s title and some of the dialogue, they are clearly a modern dance troupe.)  The professor tells the dancers a story about vampires.  Everyone’s amused.  Interestingly, most of the dancers seem to believe that there is a vampire on the loose but none of them seem particularly concerned about it.  From my own experience, this is probably the most realistic part of the film.  When you’re a dancer, that’s pretty much all you worry about.

Later, two of the dancers, Luisa (Helene Remy) and Francesca (Tina Gloriani), are walking around the woods with Francesca’s fiancée, Luca (Iscaro Ravaiolli) when it starts to rain.  They take refuge in a nearby castle, one which they believe to be deserted.  It turns out that it’s not.  Countess Alda (Maria Luisa Rolando) lives there with her manservant, Herman (Walter Brandi).  Alda explains that she allows the villagers to believe the castle is deserted and haunted because she doesn’t want to be bothered by them.  Luca is immediately enchanted with Alda while Francesca wonders why Alda looks exactly like the woman in a 400 year-old painting that is hanging in the dining room.  Luisa wanders off and gets bitten by the same disfigured vampire who has been preying on the villagers.

That night, Luisa waits in bed until the vampire comes to her.  Meanwhile Luca sneaks back to the castle to see Alda.  Alda claims that Herman is holding her prisoner but, when Herman suddenly shows up, Alda orders Luca away and proceeds to drink Herman’s blood and he goes from being a handsome servant to being the disfigured vampire that we saw earlier in the film.  It turns out that Alda and Herman’s blood-soaked relationship is all about trying to stay young.  When Herman ages, he drinks the villager’s blood to become young again.  Then Alda drinks his blood to retain her youth, which means that the now aged Herman again has to go out and drink more villager blood….

Meanwhile, the dance troupe’s choreographer has a brilliant idea!  Why don’t they do a number about vampires!? 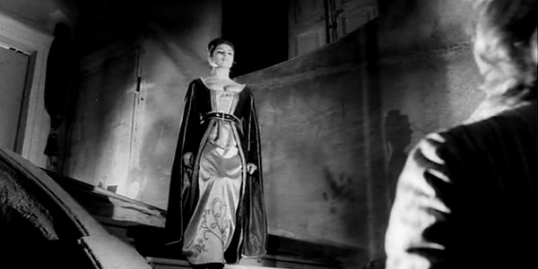 Continuing what Hammer started with the Horror of Dracula, The Vampire and the Ballerina takes the sexuality that has always been the subtext of most vampire films and instead puts it front and center.  The formerly repressed Luisia writhes in bed as she waits for the vampire to come to her.  Luca stares at Alda with an obsessive intensity before forcefully kissing her hand.  Alda and Herman torment each other, even though one could not exist without the other, a relationship that is more sado-masochistic than supernatural.

The Vampire and the Ballerina is an Italian horror film that deserves to be better known than it is.  I mean, seriously, how can anyone resist a movie that has this many vampires and this much dancing?