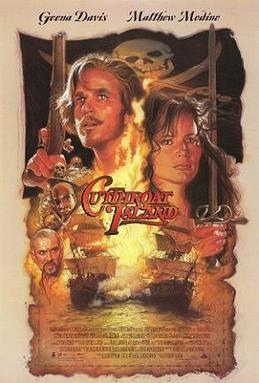 Today is Talk Like A Pirate Day which, let’s just be honest, is an extremely stupid holiday that mainly exists to remind us that “doubloon” is a deeply silly word.

Doubloons were a currency that were popular in Europe and South America back in the 18th century and pirates were always looking for doubloons.  If you listen to enough pirate talk, you’ll quickly discover that there’s a lot different ways to say the word doubloon.  Some people put the emphasis on the fist syllable while others emphasize the second.  Some people say Due-bloon while others say Duh-bloon.  Either way, it’s impossible to listen to pirates talk about doubloons without thinking that they sound very, very silly.  The secret behind the success of The Pirates of the Caribbean franchise is an understanding that it’s impossible to take pirates seriously.

Unfortunately, I chose not to watch The Pirates of the Caribbean for Talk Like A Pirate Day.  Instead, I watched 1995’s Cutthroat Island.

Cutthroat Island is a story of pirates, a lost treasure, and one big sea battle that literally seems to go on and on.  There is occasional talk of doubloons, though not enough for my liking.  Instead, most of the film deals with the efforts of Morgan (Geena Davis) to find a hidden treasure before her uncle, Dawg (Frank Langella), discovers it.  Morgan has one-third of a map.  It was originally tattooed on her father’s head.  After he died, she scalped him and took over his boat.  She also purchased a swashbuckling slave named Shaw (Matthew Modine) because Shaw is capable of reading Latin, the language in which the map is written.  Needless to say, Shaw and Mogan fall in love while Dawg teams up with corrupt colonial officials to not only track down the treasure but to also capture his niece.

The film starts out as a romance with a dash of comedy before eventually transforming into a standard action movie.  That means that boats get blown up and there’s a lot of scenes of people fencing.  There’s also a lot of slow motion footage of bodies plunging into the ocean.  The climatic battle goes on forever and it actually features Morgan hissing, “Bad dawg!” at her uncle.

(Amazingly, “Bad Dawg” isn’t the worst of the dialogue to be heard in Cutthroat Island.  Morgan has a habit of saying stuff like, “I will maroon you on a rock the size of this table, instead of splattering your brains across my bulkhead” and “Since you lie so easily and since you are so shallow, I shall lie you in a shallow grave.”)

Throughout the film, there are hints of what Cutthroat Island could have been, if it hadn’t been such a by-the-numbers action flick.  The fact that it was Morgan who was continually rescuing Shaw was a nice change-of-pace from the usual damsel-in-distress clichés that one finds in most pirate movies.  When Morgan effortlessly breaks the neck of a soldier and sets free her crew, it’s a great moment, comparable to Angelina Jolie taking out Liev Schreiber in Salt or Milla Jovovich kicking zombie ass in a Resident Evil film.  Unfortunately, director Renny Harlin (who was married to star Geena Davis, at the time) is usually too concerned with getting to the next action set piece to truly take advantage of the film’s subversive potential.

Frank Langella is smart enough to bellow his way through his villainous role while Matthew Modine appears to be so amused by the film’s terrible dialogue that it’s impossible not to like him.  Geena Davis is convincing when she’s breaking necks and swinging swords but she delivers her dialogue like someone who has already figured out that the movie was a bad idea and resigned herself to the fact that her film career will never recover.  She doesn’t appear to be having any fun, which kind of defeats the purpose of being a pirate.

Cutthroat Island was a huge and notorious box office flop and it’s still considered to be one of the biggest financial disasters in film history.  Apparently, Hollywood was so traumatized that it would be another 8 years before there was another major pirate production.  That production, of course, was Pirates of the Caribbean, a film that captured the fun that was so lacking in Cutthroat Island.