The majority of the film takes place during World War II.  While the Germans are ruthlessly rolling across and conquering huge swaths of Europe, the British are desperately trying to, at the very least, slow them down.  A key to that is decrypting the secret codes that the German forces use to communicate with each other.  Since the Germans change the code every day, the British not only have to break the code but also predict what the next day’s code will be.

Working out of a 19th century mansion called Bletchley Park, a small group of mathematicians, chess players, and spies work to design a machine that will be able to decode the German messages.  Heading up this group is a man named Alan Turing (Benedict Cumberbatch).  Alan is a remote and, at times, rather abrasive figure, a man who appears to be more comfortable dealing with equations than with other human beings.  The people working under him occasionally chafe at Alan’s lack of social skills.  Commander Denniston (Charles Dance) suspects that Alan’s a Russian spy and would just as soon close down the entire operation.  At first, the only person who seems to have any faith in Alan’s abilities appears to be Winston Churchill himself.

It’s only when Joan Clarke (Kiera Knightley) joins Alan’s team that they start to make progress.  Joan brings Alan out of his shell and teaches him how to deal with other human beings.  When Joan’s parents object to her being away from home, Alan even offers to marry her.  Of course, Alan also explains that it would just be a marriage of convenience, one that will last until they get Christopher up and working.

Christopher is the name that Alan has given to his encryption machine.  Why Christopher?  Throughout the film, we get flashbacks to Alan’s time in boarding school and his close friendship to another student, a boy named Christopher.

And finally, serving as a framing device to both the World War II intrigue and Alan’s relationship with Christopher, is a scene that’s set in 1951.  Alan’s home has been broken into and, as the police investigate the matter, they come to realize that Alan is hiding something about both his past and his present.  Their initial assumption is that Alan must be a communist spy.  The truth, however, is that Alan is gay.  And, in 1951 Britain, that is a criminal offense….

The Imitation Game is based on a true story.  During World War II, Alan Turing actually was a codebreaker and he did play a pivotal role in creating the machine that broke the German code.  After World War II, Turing was arrested and charged with “gross indecency.”  Given a choice between imprisonment or probation and chemical castration.  Turing selected the latter and committed suicide in 1954.  Alan Turing’s work as a cryptographer is estimated to have saved 14 million lives during World War II but he died a lonely and obscure figure, a victim of legally sanctioned prejudice.

Admittedly, The Imitation Game does take some liberties with history.  For one thing, most of the people who worked with Turing described him as being eccentric but not anti-social.  Though the film pretty much portrays the decoding machine as solely being Turing’s creation, it was actually a group effort.  Perhaps the biggest liberty that the film takes is that the machine was never called Christopher.  Instead, it was called Victory.

That said, The Imitation Game is still a strong and effective film.  Anchored by a brilliant lead performance from Benedict Cumberbatch, The Imitation Game is a film that manages to be both inspiring and infuriating at the same time.  It’s impossible not to get caught up in the team’s joy as they realize that they actually can beat the Germans at their own encryption game and, after spending 90 minutes listening to everyone doubt Alan’s abilities, you’re more than ready to see him and his unorthodox methods vindicated.  And yet, because of the film’s framing device, you already know that Alan is not going to get the credit that he deserves for his hard work.  Instead, he’s going to be destroyed by the laws of the very country that he worked so hard to save.  Success and tragedy walk hand-in-hand throughout The Imitation Game and the end result is a very powerful and very sad movie.

I have to admit that it was a bit jarring when the opening credits appeared onscreen and the first words that I read were “The Weinstein Company Presents.”  It’s only been a year and a half since Harvey Weinstein was finally exposed and forced out of power but it’s still easy to forget just how much the Wienstein Company used to dominate every Oscar season.  In many ways, with its historical setting and its cast of up-and-coming Brits, The Imitation Game feels like a typical Weinstein Company Oscar contender.  In this case, The Imitation Game was nominated for a total of 8 Oscars, including Best Actor for Benedict Cumberbatch, Best Supporting Actress for Keira Knightley, Best Director for Morten Tyldum, Best Adapted Screenplay for Graham Moore, and Best Picture.  In the end, only Moore won his category.  In a decision that continues to confound me, the Academy named Birdman the best film of the year. 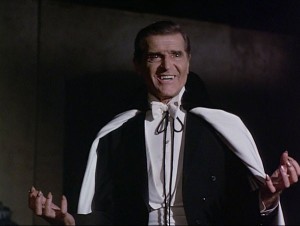 Much like Thriller, Night Gallery is an old horror anthology series that I’ve recently discovered thanks to reruns on Me-TV. Airing in the early 70s and hosted by Twilight Zone‘s Rod Serling, Night Gallery usually featured two or three stories per episode and even provided a few early credits for director Steven Spielberg.


Of course, Spielberg didn’t direct the episode below but that’s okay. It’s still pretty good. It tells two stories. In A Question of Fear, Leslie Nielsen plays a mercenary who takes a bet to spend the night in a haunted house. In The Devil Is Not Mocked, Dracula talks about how he fought the Nazis during World War II. Interestingly enough, Dracula is played by Francis Lederer who, 13 years later, played the same role in The Return of Dracula.


The episode of Night Gallery was originally broadcast on October 27th, 1971.