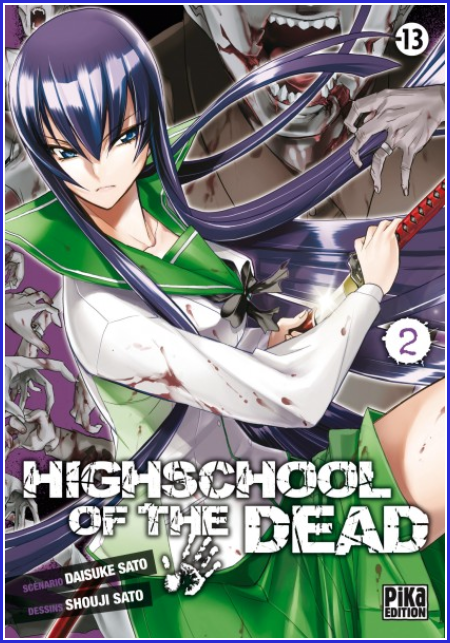 We’re now into Episode 2 of Madhouse’s anime adaptation of the popular manga Highschool of the Dead. The first episode was one of the most popular series premieres simulcast over at Anime Network and with reason. This manga has gained quite the following not just in Japan, but in North America. What’s not to like about it. It has great artwork which meshes well with the subject of zombies, apocalyptic settings and, most importantly, the ecchi nature of the female characters’ designs. It’s a teen biy’s and young men’s dream manga and now it’s well-done translation into anime should guarantee that Highschool of the Dead‘s first 13-episode will be a success which can lead to another order of 13-episodes (a number that Japanese anime production houses have deemed the correct and ideal one for a series of late).

Episode 2 continues with the first one’s introduction of the premise and the characters who will be the focal point of the series. While we see the two main characters from the first episode appear in this episode they’re definitely not the focus. This time around we’re introduced to four more characters in the form of 3 females and 1 male. The lone male is a favorite character of mine and that is the gun otaku, Kohta Hirano. He’s like the geek in pretty much every anime/manga fan who finally has a chance to actually make use of a particularly useless skill. In Kohta’s case it’s the use and maintenance of weapons even to the point of creating a makeshift one out of a portable nailgun. The three new females to join Rei Miyamoto introduced in episode 1 are Saeko Busujima, Saya Takagi and Shizuka Marikawa.

Saya becomes attached to Kohta during their attempts to avoid the zombies now roaming and hunting the surviving students and faculty. Saeko Busujima joins up with ditzy and fanboy wetdream Shizuka Marikawa. Saya’s character seemed to be set-up to become the annoying one in the group in the anime as she’s shown to be bossy, too smart for her own good, but also quite helpless when confronted with danger. School-nurse Shizuka is quite helpless herself, but probably due to her being such a ditz to begin with. Of all the characters shown so far she seems to be created just to be fan-service. Not that I am complaining mind you. Now we get to one Saeko Busujima. The sophomore who also happens to be the school’s kendo club captain and champion in her own right. She’s cool, calculating and quite the badass. It doesn’t help that she’s also the hottest thing in the anime by a huge margin. The 1/8 resin and PVC figures made of Saeko are becoming as popular as another fan-service heavy character anime/manga fan know as Kanu Un’chou of Ikki Tousen fame.

The quality of this second episode is on the same level as the pilot episode and I don’t see it changing anytime soon. I do hope that these two episode will be all that’s needed by the series writer  Yosuke Kuroda to introduce the series plot and it’s characters. While I’m more than happy about the pacing of the series so far the casual anime fan who have never read the manga may get bored and move onto something else. Like any tv series whether animated or live it’s keeping the casual viewer interested that makes or breaks a series.

One response to “Highschool of the Dead: Episode 2 – First Impressions”